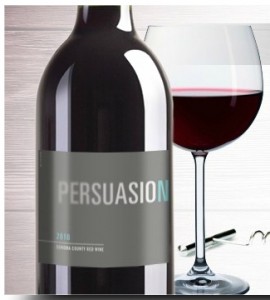 Okay, so it’s not as exciting as Dragon Wine, but Arlene Dickinson (from CBC’s Dragon Den) has announced that she’ll be releasing her very own wine this fall!

According to wine expert Â Shelley Boettcher, there will only be 1,200 cases of the Cabernet Sauvignon-Merlot blend released to the public for purchase.Â  I don’t know a lot about wine, but I think that means it will be red! So…that’s cool. Â  The 2010 Persuasion â€˜Dragon Blendâ€™ Red, will cost you $35 for a bottle, which makes it about $27 more dollars than I’m usually willing to spend on a bottle of wine.

The wine release is tied into the release of Dickinson’s new book called Persuasion, where she talks about the secret of her journey from pover to the corner office is the art of persuasion.

This is probably good advice for dating too, or you can just buy them the wine and get them drunk. Up to you.