It’s been a big week for the cult internet sensation Dr. Horrible Sing-A-Long Blog. On Tuesday, the BluRay edition of the movie hit shelves and just a couple of days later, the first ever production of Dr. Horrible Live opened up in Calgary. Â Yes, not New York or London, Calgary. Â I was surprised too.

Thanks in recent years to musicals like Avenue Q, Urinetown and Evil Dead: The Musical, the idea of a “cool musical” is becoming more of a reality, which is why a something as geeky as Dr. Horrible has been able to break into the mainstream. Â So forced to battle against each other, which version of the would come out as the victor…or better yet: the villain? 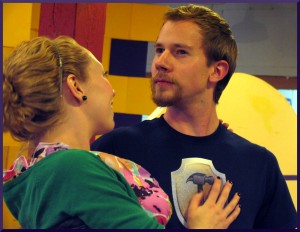 Going into the night, the show had one major thing going against it: Â 100% of the audience had already seen the web-series and were probably obsessed with it. Since debuting two years ago, the hit has been released on DVD and become an art-house fundraising staple. Â But besides a few high-school or amateur productions, this was the very first professional run of Dr. Horrible Live. Â And the fan-base is certainly rabid is enough to justify a live production, the show’s two week run is practically sold out and extra shows are being added just to accommodate the demand.

David Elder had the difficult task of playing the now idolized role of Dr. Horrible. Â Originated by Neil Patrick Harris, Â David he was able to capture the Dr.’s confusion over being in love and trying to rule the world all at once. Â Easily the best voice of the show, Elder easily fit into the lab coat and infamous evil goggles.

The role of Captain Hammer was played by Evan Westwall. Â While his vocals were also very strong, ff you are going to have someone play a super hero whose joke’s mostly consist of talking about how strong and big his muscles are, it would help if the actor had some. Â Obviously every actor that plays Captain Hammer isn’t going to look like Nathan Fillion, it would have been great if Dr. Horrible’s nemisis was at least bigger than him. Â It may seem petty, but whenever Evan Westwall pointed to his muscles, the audience became distracted just trying to find them.

The show’s biggest weakness was it’s technical side. Â The whole set could have used one or two more coats of paint, many of the of the walls and props simply looked like they weren’t finished. Â The stage lighting seemed unplanned and all over the place. During different points of the Â show, characters were poorly lit or not lit at all. Whether this was a directorial choice was not evident to the audience.

As with any great show, the chorus was given equal opportunity to shine and they worked their butts off, often got the biggest laughs. They even opened the show with three very entertaining and new songs only found on the Dr. Horrible DVD.

Forced to sum up the show, I would have to Dr. Horrible has the beginnings of an okay off-broadway show, at the very least a great first or second draft. Crafting a show that has never been mounted before means starting from scratch, it also means this show has miles to go. It is still a blast to watch and consistently funny, and I think it has definitely set itself up to be our generation’s Rocky Horror Picture Show.Â Â Fans of the series will enjoy seeing their favourite characters and scenes come to life, but unfortunately it will be too easy to also find flaws with the production. 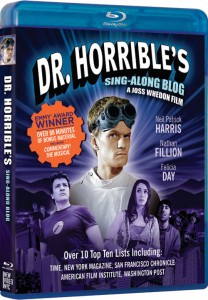 When Dr. Horrible debuted online two years ago, part of the excitement was waiting each week for a new installment, now that the entire series is clumped together on one high definition disc, it thankfully still hasn’t lost any of it’s magic!

While the series itself is practically perfect, the special features of the disc really bring the production to a whole new and exciting level. Â For me, The highlight would have to be Commentary: The Musical. Â Instead of the usual commentary (which is another special feature), the whole cast gathers together for 42 minutes of new music. Â With good reason, some of these songs were included in the live production. Â Some of the funnier songs are $10 Solo and No One is Asian.

As with every time I watch Dr. Horrible, the disc makes me yearn for a much-rumored sequel. Though I suspect, at least for now, this Doctor will do just fine on it’s own.