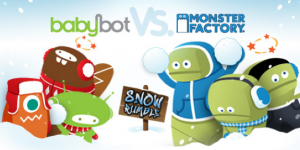 Just found a locally grown Iphone game and thought I’d take a moment to share it with you guys!
It’s free on Itunes and the developers are from right here in Calgary.  I struggle to remember how to turn my phone on silent, I have no idea how people know how to make a game!  I must have missed that course in the School of Life.
Anyway,  the game is called BabyBot vs. Monster Factory and if you’ve ever used the site BabyBot, you might really like it.  I don’t know if I’ve ever seen this before but the more you play the game, the better discounts you get at the Babybot store.  I think it’s a great way to drive fans of the game to your website.
The game is a updated version of the classic snowball fight that we used to have when were kids. What I’m liking about it so far is that it is pretty hard.  Usually Iphone games are pretty basic, especially when they are free.  But this one has me frustrated in the best possible way!

Since we are all in the middle of deep-freeze, why not check out the game.  I think you’ll like it!