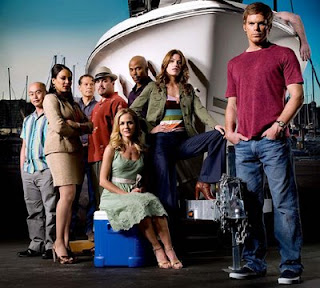 I would like to declare Wednesday June 4th as the day that I finally defeated my enemy/best friend known as Dexter. Â That’s right friends in a relatively short period of 10 days, I have been able to complete all two seasons (that’s a total of 24 episodes) of the heroic serial killer drama. While factors such as two straight weeks of rain and lack of funds certainly helped, I like to think it had to do more with my hard work, determination and the fact that I’m pretty sure this show is freakishly addictive.

While some might not consider this an accomplishment let alone something to blog about, I would like to argue that most athletes only compete in the Olympics for one competition and how long does it take to throw a javelin or ride a bike? Â 5 or 10 minutes? Â
Dexter took 10 days. Â
Gifts of congratulations can be sent directly to my apartment.
Battlestar Gallatica and Dr. Who you are next.
But for now I must do laundry and stop calling in sick to work. Â I think they are wondering.