Do I have to pay it forward? 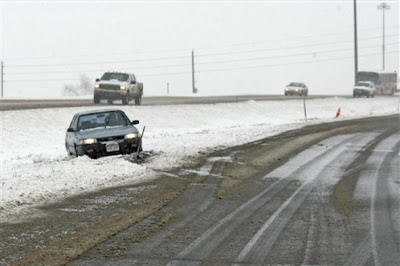 Also available on The Calgary Herald’s The Q

Lately, my daily routine has become pretty normal. I get up, shower, have breakfast, ignore the pile of Christmas bills on my counter, go outside, start my car and then ask strangers to help me get out the snow bank that is my street.

But yesterday something happened. As per usual, I had three different people trying to dislodge my car from the snow and ice that lines every unplowed street in Calgary. All of a sudden, a fourth person came to my aid. He was everything our city government isnâ€™t. Efficient, organized and was actually helpful. He dug a little path for my car and I was fortunately able to get out. Before I drove away, I got out to thank my little â€œsnow bank angelsâ€ and thank this one man especially for being so helpful.

Upon thanking him, his reply was this: â€œNo problem, some of us are more helpful then others.â€ He handed me a business card and was gone faster than a transit bus driver running a red light.

I was (and still am) so confused by this nice manâ€™s response. â€œMore helpful than others?â€ Who was he referring to? The people who were trying to help? The city? The Coalition Government? Me?

As I got back in my car, I looked downed at his card and I saw that it was for a grassroots neighborhood charity group.

I quickly realized that I just got Pay it Forwarded. Crap. If I knew that this was going to happen, I probably would have cancelled my plans and just sat in my car. Not only did this man confuse me with his weird declaration, I am now stuck with the unenviable task of having to help someone and not asking for anything in return.

So far, I havenâ€™t decided whom I am going to help. I donâ€™t want it to be an obvious choice or someone that wonâ€™t appreciate my help, no matter how begrudgingly I give it. And yes, I am referring to the city council again.

Which makes me think that maybe this was the mayorâ€™s plan all along. The city refuses to plow the streets, then they send out these good-will vigilantes all in an effort to make us nicer people. It makes sense and maybe it just might workâ€¦.

Nah, Iâ€™d rather they just plowed the roads.