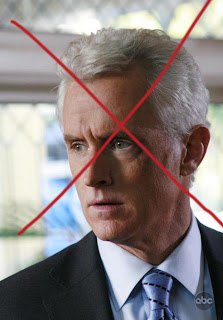 It was announced back in September that two Desperate Housewives characters would bite the dust in tonight’s Tornado themed disaster episode.

According to the previews it could have been anyone. Judging from the previews it looked like it was going to some close to Lynette (Felicity Huffman). I was really hoping it wasn’t going to be since she has already been more than any other character on the show, I think this is because she is the strongest actress out of the group of them, but give the lady a break, you know what I mean. She’s already survived a supermarket massacre, cancer and a “new” child.

During the actual episode my roomie and I began to worry that it would be Lynette’s husband Tom. Then we thought it would be Lynette’s babysitter, the hilarious Karen McLuskey, which would be just like Desperate Housewives to get rid of good thing way too soon.(Mrs. Huber anyone?) Â It even looked like Carlos was going to meet his maker.

But no when the tornado finally made it’s way through Wisteria lane it was Sylvia Green (Melora Walters) and Victor Lang (John Slattery) that were swept out the window and stabbed with a picked fence respectively.

They don’t even live on Wisteria Lane! Oh and did I mention that we just met Sylvia (Tina Fey‘s sister???) last week.

This would have been an ideal time to get rid of Desperate Housewives dead weight like Mike Delfino or Andrew. But instead we got rid of two people that didn’t really have a point to being there anyway.

Oh well, it was still a pretty cool and exciting episode. And the final scene of Lynette seeing that the house where her family were taken shelter was flattened by the tornado was pretty thrilling. And the set? Wow! Good job, who needs writers when the crew can make the street look like that!?!?

So rest in piece Victor Lang and the other girl, we barely knew ye.

PS: Can I also ask the question that was on everybodys mind tonight: Why does only one house on Wisteria Lane have a basement? Â Is it even possible for a house not to have a basement?