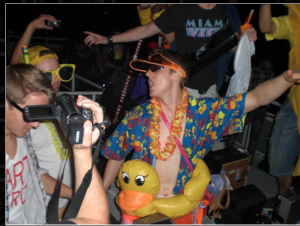 I seem to be writing about dancing a LOT this week.Â  Is that weird?Â  I don’t know, I’ve also been having a lot of solo-dance parties lately too.Â  Now that I know is weird but I’ve just been feeling like shaking my groove thing more than ever!

“For the past five years, Tom Kuzma + Gary Lachance have been staging Unsolicited Dance Parties across Canada and around the worldâ€¦Â  Sick of the bar/club scene and sick of the music that other people played at Parties, they broke off, vowing to never again allow themselves or their friends to suffer Bad Music, Bar Rules, Cover Charges or Dumb Bouncers.Â  By combining the versatility of the modern Mp3 player with the resilience+volume of the vintage boombox, they created the Ultimate Party Machine: a portable Party-To-Go hybrid that could blare their Own Music as Loud and Late as they pleased.”

I actually found out about the Decentralized Dance party during the Olympics when we accidentally stumbled upon them on the edge of Robson Square.Â  It was completely fun to join a group of strangers and dance for a few minutes. After standing in line for pretty much everything,Â  I remember how completely relaxing it was to just let loose and have fun.Â  It was probably the closest I ever came to not being up-tight.

If you think this is your sorta thing, join the dance party’s Facebook page and keep an eye on the location.Â  They usually announce it right at the last minute!

Dress as you want but come ready to dance and party, I’ve already started the hydrating process.