Dave Kelly: Over and Out! 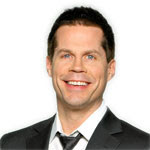 Today is a sad day for Calgary’s Breakfast Television. Popular host Dave Kelly announced this morning, that he is stepping away from his job as co-host of the high-rated morning show!

Dave has been hosting the show for over twelve years and has done more than 25,000 (!) interviews! What a milestone!
He is leaving the show to pursue his other passions which include writing and Kelly Brothers Productions, a live and video/film production company, that he runs with his brother Rob!
As most of you know, for the past year and a bit, I have been doing segments with Dave on Breakfast Television. He is easily the funniest and most gracious person I’ve met in the business so far. He is also become sort of a mentor for me. He doesn’t know it, but he has been beyond helpful in helping me with my television segments.
While the Calgary TV landscape will never be the same, I’m excited to see where Dave will end up next. We should all take a page out of Dave’s book and follow our dreams, no matter how risky they might be!
Dave’s last show will be NYE.
Here is one of my favorite segments with Dave and fellow co-host Jill Belland.