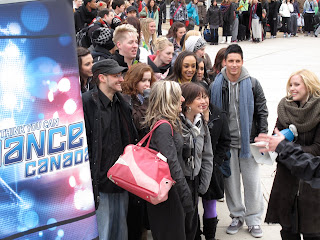 This past weekend, I got the chance to visit a LuLu Lemon factory just minutes after it exploded!
Actually, it was the So You Think You Can Dance Canada auditions, but if you toss in some Ugg boots and stage parents, you could barely tell the difference.
While I wasn’t there to audition, I was really curious to talk to the dancers and see what it takes to win the show!
If you ever get a chance to talk to a dancer, they’ll tell you that they don’t know how to give up. That’s why so many of them that I talked to on Saturday had auditioned for the show before. If they didn’t make the cut, they’d listened to the judges, go home, practice, study and work. After all, season 2 winner Tara Jean, didn’t get pass her audition in the show’s first season. Now, twelve months later, these dancers back. And not only were so many of them ready to win SYTYCDC, they were willing to freeze to do it.
The morning of the auditions, Calgary was freezing. By the time I had gotten there, most of the dancers looked more like extras from Titanic than world-class dancers. I lasted about thirty minutes before I pulled the media card and got to go inside. Ahhh the advantages of not being a dancer! 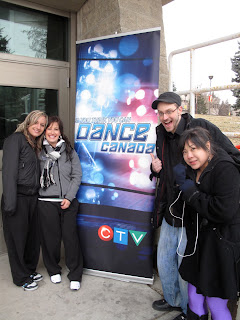 The first four: Ashley, Laeticia, Scott and Kathy
Despite the freezing temperatures, the dancer’s spirits were infectious. Plus you’ve never met a group a people that love the camera more than these kids. They pretty much could smell the cameras. Sometimes, I felt like I was being interviewed, “Who are you?”, “Do you want our picture?”, “Where can we find it later?”
It was then I realized that these dancers were just like me, only flexible.
I also got the chance to talk to SYTYCDC judge Black McGrath and host Leah Miller. I’ll have those interviews up and ready to read on Monday and Tuesday! 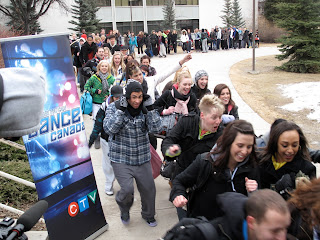