Dan Mangan: Stop me if I sound crazy. 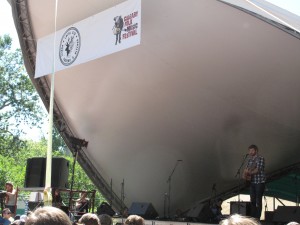 Most writers won’t ever freely admit that they should be kept away from a musician. Because if they did, it would greatly hinder said writer from ever getting a proper interview from the artist.

I’m not most writers.

While I’ve never been too shy about my affinity for Dan Mangan‘s disc Nice, Nice Very Nice, I’ve actually never seen him perform live…until this weekend at the Calgary Folk Music Festival. 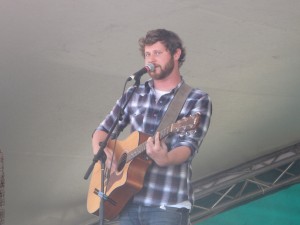 I saw Dan (first name basis) a total of five times this weekend. Â  Five. I don’t think his own mother has seen him perform that much in a 32 hour time period. But whatever, he’s that good. Once was a solo show, another was a short two-song set before Corb Lund. Â And three times where workshops where he sang with the likes of The Sunparlour Players, Samantha Savage Smith, Jon and Roy and Karla Anderson.

Actually, I almost got the chance to interview him this weekend too, but due to a non-festival related commitment, I couldn’t make it. I think it was probably best for both of us.

So instead, I settled for this picture: 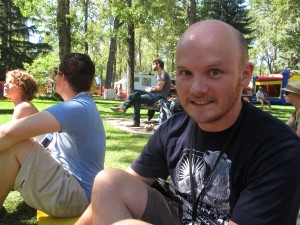 Sure I could have talked to him, but what would I have said?!

Now I must re-iterate that I’m not in love with Dan Mangan. Â Like I wouldn’t stand down wind from him and hope that I can catch a loose hair as it floats by. Â That would be weird. Â I mean love like, if I were ever to be involved in a movie, I would insist that Mangan write the entire soundtrack. Â Or if hell freezes over, Dan can write a wedding song for me. That’s right, I want him to write an original song just for me. Â You could think it is creepy, or you can just be jealous that I thought of it first.

So since none of that seems to be happening anytime soon, I thought I would buy one of Mangan’s shirts. Â Sadly (and probably for a reason) there are no mens sizes for his merchandise. Â And as hard as I tried, it just wouldn’t fit: 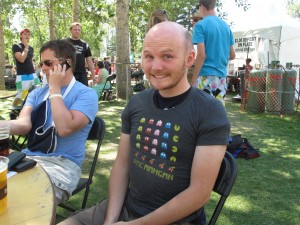 So instead, I’ll have to look back at pictures and videos the weekend.

Thank you for putting on five great sets this weekend, now rest your bloody throat. Â I mean that literally and figuratively. Â That’s right, we have inside jokes.