CTV's roof is on fire! 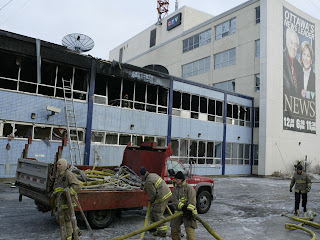 Things are heating up at CTV, literally.
The CTV Ottawa newsroom went up in flames on Sunday morning. Damages are estimated at $2.5 Million. What really sucks is that the blaze also destroyed the station’s news archives, ensuring that we never remember that Kim Campbell was once our Prime Minister.
The station was also home to my all-time favourite show, You Can’t Do That On Television. This is a rumor going around that some left over slim was actually used to put out the fire. Everyone was going around saying “I don’t know! I don’t know!”

This station is also where Peter Jennings got his start!

The cause of the fire isn’t known, but I’m guessing someone in Global’s passive-aggressive department PR Department has something to do with it!