CTV and JWoww: Synergy at its worst? 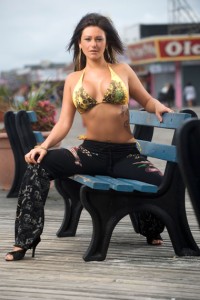 Ladies and Gentleman, may I please present to you the next piece of evidence in the case against Network Synergy:

Quick lesson: JWoww is one of the stars of the MTV’s biggest show right now Jersey Shore. It’s like Teen Mom but the babies are actually grown ups.

As a part of her promotional duties, JWoww will be in Toronto on Monday and Tuesday doing the usual circuit. The problem, of course, is that when you are a on a CTV owned show, the “usual circuit” is pretty much any media source in Toronto. Okay, not every media source but it’s pretty frickin’ close. Yeah that’s right, I just dropped a Jersey Shore reference….or at least I think I did.

In 48 Hours, the reality show star will essentially be everywhere:

Uhhh are you kidding me?Â  That is the definition of overkill. Let’s not forget, this is all within 48 hours!Â  Look, I get appearances on MTV, Much and ETALK. Their main audiences eat up Jersey Shore like it was a Beaver Tail.Â  But The Marilyn Denis Show?Â  Canada AM?Â  Really?Â  If she wasn’t making any appearances in Toronto except Canada AM, then I might understand, she’s good TV. But with so many other appearances scheduled, she really has no right showing up on a news program like Canada AM.Â  It really does just seem greedy on CTV’s part, no?

For a girl that’s really only famous for being drunk and fighting, I’m pretty sure the most watched morning show in Canada’s producers are biting their tongue on this one.

And how bad is it that media-icon Marilyn Denis has to interview Jwoww not once, but TWICE within two hours.Â Â  Maybe she’s already regretting coming back to network TV?

While I’ve never claimed to be a marketing expert, I always thought that less was more.Â  How are any of the shows supposed to feel like they have any sort of exclusivity, when their co-workers are talking with her fifteen minutes later?Â  Then again, this is the network that had Ben Mulroney interview his boss on the Oscar Red Carpet, so obviously they aren’t trying to shy away letting you know that soon they’ll be in charge of everything.