I’m going to be honest, I didn’t watch the Emmy’s. I was flying back from Vancouver and missed, what is normally, my favourite awards show. I’m a sucker for TV, but you know that.

So because I didn’t watch the award show, I’m not going to fake it and do this in-depth report on the Emmys, but I would like to comment on the winner of the Best Supporting Actor in a Comedy Series: 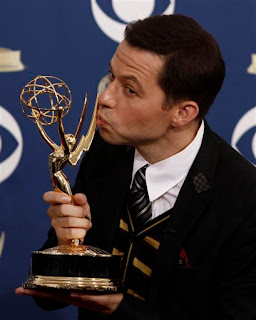 What the hell is this? Jon Cryer beat NPH and Jim Parsons!?! Really? This isn’t a joke conjured up by Air Canada, just to annoy me? I honestly can’t imagine how Emmy voters could watch How I Met Your Mother or Big Bang Theory and think that Cryer is better on Two and A Half Men? And yes, I purposely didn’t bold the name of that show. I know it’s easy to say, “What is wrong with the Emmy voters?” But really, WHAT IS WRONG WITH THE EMMY VOTERS?!?! So crazy. This hurts my exhausted and bald soul.

Head on over to XOXO Jes for all Emmy winners and trust me, you’re going to want to hear what she has to say….just don’t read it at work.