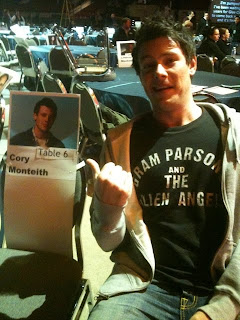 As many people know, GLEE’s biggest star, Cory Monteith was in his hometown of Calgary all weekend. And by all accounts, he was as nice and cool as he is on the show.

I was way too sick to go even near the red carpet, but all the media was talking in the back room about how awesome he was. He spent time talking to everyone that he could, which isn’t an easy thing to do when EVERYONE wants to talk to you. Not that I would know.
Monteith easily got the loudest screams from the throngs of fans sitting in the bleachers at the Geminis, he even came on stage twice to participate in the awards show. Once was to perform in a medley with Canadian Idol loser/winner Theo Tams and Mike Reno from Loverboy. I’m guessing a Glee embargo kept Cory from singing, so he played the drums instead. (click here to watch the video) He then came back on the stage to give the Best Comedy Show Award to Rick Mercer. Even Mercer was impressed saying: “I just hugged the guy from Glee!
I was really hoping to find a flaw with this guy, but no luck. Anyone else have any cool Cory stories?