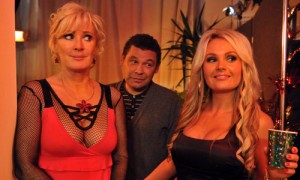 Any Coronation Street fans out there?

Okay, well my grandmother is a huge Corrie fan, so, I guess,Â  this one is for her!Â  For years the British series has lagged behind on CBC by about eight months, but now the network is playing catch up by doubling up on the episodes every night. Starting this fall, right after the news, fans will be able to get two episodes of their favourite British soap.Â  The goal is to eventually to get caught up with Coronation StreetÂ  fans in the UK.

This would certainly make Canadian fans happy, since they have to be extra cautious to avoid online spoilers and casting details.Â  I can’t imagine having to suffer through being eight months behind shows like Lost and Fringe, so I can imagine Corrie Street fans will be extra happy.