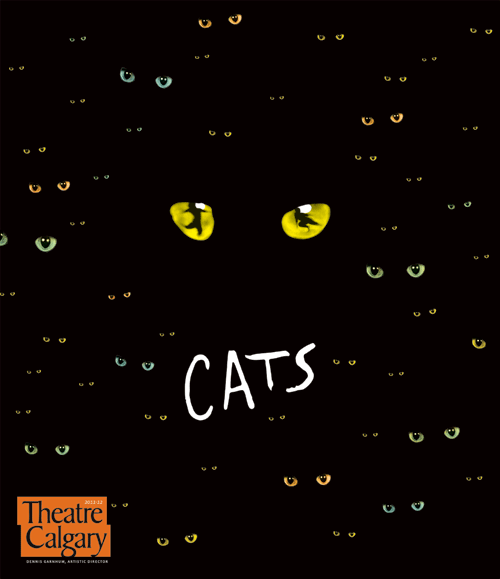 Here’s a fun fact for you: When I was ten years old, I played Magical Mr. Mistoffelees in a school play!

Okay, maybe that’s more embarrassing than fun, but I do have a point.

This Friday, Theatre Calgary‘s final production of the season opens and it will have audiences all a purr!

Since it’s first performance in 1981, CATS has been wowing crowds from all over the world.Â  And now comes the first made-in-Alberta production of this ground breaking musical. Let the â€œMemoryâ€ live again. With record-breaking runs on Broadway and Londonâ€™s West End, this worldwide sensation is one of the most beloved musicals of all time. Join Grizabella, Old Deuteronomy, Mister Mistoffelees and the rest of the Jellicle Cats as they gather under a full moon to discover who will be chosen to ascend to the Heaviside Layer.Â Â  I saw the show when I was a kid (before I was in it) and it’s such a fun show with songs that will be stuck in your head FOREVER!

I have two tickets to the Tuesday, April 17th show to giveaway!

To enter:
Tell me who is your favourite character from the show?Â  (Here’s the list if you need some help.)

You can also get a second entry via Twitter.Â  All you have to do is tweet:Â  “I’d love to see @theatrecalgary’s production of CATS and @mikesbloggity is giving away tickets! http://goo.gl/ntMzi”

The show is in Calgary (clearly), so you should live in the area or be willing to commute for Tuesday night’s show!