Contest: Win a four-pack of tickets to Wicked! CLOSED

Theyâ€™re back! By â€œpopularâ€ demand, Witches both east and west are coming back to Calgary and they happen to be bringing one of Broadwayâ€™s biggest shows ever with them!

Thatâ€™s right, after an amazing run in 2011, the three-time Tony Award winning musical Wicked is blowing into town from July 23rd until Â August 17th! If you missed the show last time, here’s your chance. And if you saw it last time, well, you already know that you have to see it again!

Since my parents live on the east coast, the three of us donâ€™t get to do things that often. So back in 2011, when Wicked was last in town, I was so happy that the timing of their trip to Calgary worked perfectly so we could see the show together. Like everyone under the sun, we had all heard a lot of great things about the show, but Wicked really is one of those shows that seeing is believing! Now, all these years later, we still talk about the spectacle of the show. I actually tried to get tickets to see it again in NYC two years ago and it was sold out, which is amazing considering it opened in 2003. Needless to say Iâ€™m relieved that Wicked is coming back to Calgary now! 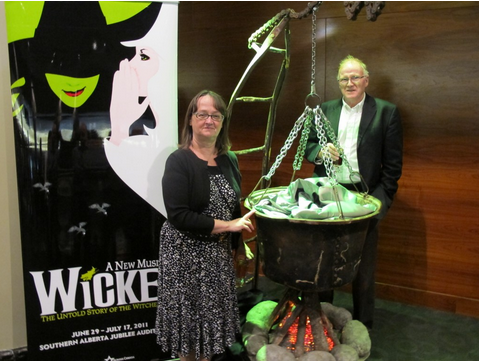 If youâ€™ve been living in a tornado and donâ€™t know the story of Wicked, well hereâ€™s what you need to know: Basically, a lot of crazy, sweet, sad and beautiful stuff happened before Dorothy discovered the land of Oz. Wicked is the story of two girls, one – born with emerald green skin – is smart, fiery and misunderstood. The other is beautiful,Â ambitious and very popular. How these two grow to become the Wicked Witch of the West and Glinda the Good makes for â€œthe most complete – and completely satisfying – musical in a long timeâ€ (USA Today).

Iâ€™ve got a four-pack of tickets to the Wednesday, July 23rd premiere of Wicked. So if you too want to take your parents, or your siblings or even your friends, this is your chance. Thereâ€™s a couple of ways to enter:

Scroll down to the comments section and tell me which witch are you most like, Glinda or Elphaba? And tell me why? (You can also answer that you are more like the flying monkeys…but you better have specific examples.)