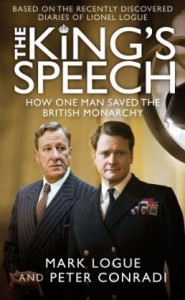 Okay, so we had so much fun with last week’s Gift A Day Giveaway, I thought I would add one more just for fun!

Just in time for Christmas, The Golden Globes and The Oscars is a prize back from the most buzzed about movie of the year. (I was going to say ‘talked about’ but that seemed inappropriate given the material.)

Before you go see The King’s Speech in theatres, why not read the book that inspired the movie? The King’s Speech: How One Man Saved The British Monarchy, tells the story of how a speech therapist named Lionel Logue who single-handedly turned the famously nervous, tongue-tied, Duke of York into the man who was capable of becoming King!

I’ve got FIVE copies to giveaway to some lucky readers.Â  As an added bonus, I’ll toss in the double movie pass to see the movie while it is in theatres!

As always, two ways to enter:

1) Leave me a comment with a quick story about something that you’ve overcome. (Yeah, it’s a little more work but it’s Christmas, I wanna be inspired.)

2) Tweet this message:Â  “I wanna win The King’s Speech book and movie passes from @mikesbloggity!”