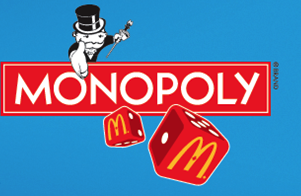 Wow! What a week! I have another contest to announce!

On top of the Maple Music Pack (enter here), to celebrate the return on Monopoly to McDonalds today, I have Monopoly Prize Pack!!!
The pack includes $25 Gift Card to McDonalds and a traditional Monopoly Game Board!
How do you win it?
Email me (mikesbloggityblog@gmail.com) and tell me which one of these Monopoly facts isn’t true, the correct answers will be put in a draw, which will be made on Friday!
Which is NOT a Monopoly fact:
Good luck!