The tagline for Cards Against Humanity is: A party game of horrible people.
So, Â it makes sense that Netflix would release a special edition featuring a House of Cards expansion pack. Because, even if you’ve only seen five minutes of series, you know that when it comes to people, they don’t get much more horrible than the Kevin Spacey and his Washington crew.

Whether you’ve already devoured the second season or you’re patiently watching one episode of a time, this is a great way to enjoy the evilness of House of Cards long after you’ve turned off your TV. Plus, since you can play Cards Against Humanity with up to 20 people, it’ll help you figure out which of your friends you should never trust. What? Â We all have one. 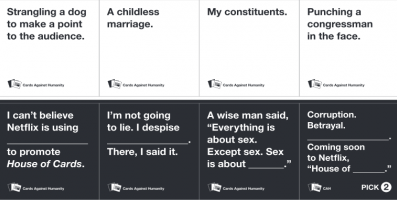 To enter, tell me which House of Cards character you’d like to play House of Cards with? Â If you need some help, there’s two season of the show now streaming on Netflix Canada.Â