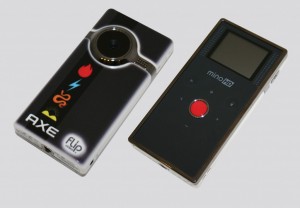 I think it is time for a new contest!!! Â What do you say?

This prize is another good one too!!! Â Just in time for summer, Axe Showergel and Mike’s Bloggity Blog wants to give you an HD Flip Camera!

All you have to do is leave your Power Anthem in the Comments section. It can be anything- recalling the details of your most favourite concert, an insane night of Canadian beer, pubs, friends and debauchery Â or anything else that comes to mind. Whatever the moment-post it in the comments section!

Just so you don’t feel all alone, I’ll get the ball rolling!

When I was 21 years old, after taking only one Spanish class, I decided to move to Spain for the summer. Â I didn’t know anyone there, hell I barely even knew the language. Â But I got on the plane, then a train and ended up in the beautifully historic city of Granada. It was there I would spend the next two months, meeting new people, learning a new language and living in the apartment that I’m sure inspired the movie Hostel.

The whole experience was terrifying and exciting all at the same time. Â Somedays I would call home crying, other days I would call bragging to my family about all the cool stuff I was doing. Â It was on my way back to Canada, when I actually told myself out loud. Â “Now, there is nothing I can’t do.” Â I would later learn that maybe that was a little too optimistic, but I think I was pretty damn close!

Now that I’ve shared my power anthem. Â It is your turn!

Leave your anthem in the comments section! Make sure you leave your email so I can notify the winner!

Bonus entry:
For a bonus entry, Tweet the following message: “I want to win an HD Flip Camera with @mikesbloggity and Axe Shower Gel http://ow.ly/1H5Bl”

Rules:
Contest closes May 10th at 11:59/mst.
Must be Canadian.
Must not have won with Mike’s Bloggity Blog in the past six months!