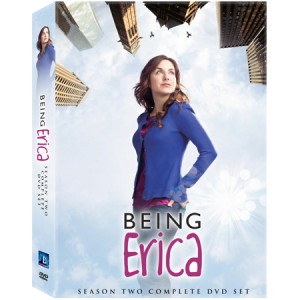 In celebration of Being Erica Season 2 DVD release next week (September 14th), I’m more than happy to be giving away two copies of this amazing Canadian series.Â  You hear that Lindsay Blackett?Â  A show that is far from shit!

You’ll remember that this is the season that Erica met the mysterious Kai, her relationship with Ethan reached a boiling point and we found out a LOT more about Dr. Tom.

So how do you win them?

Two ways:
1) Check out my brand-new exclusive interview with Erin Karpluk about Season 3 and tell me which part of the new season you most excited about! Leave your answer in the comments!
2) Tweet the following message:Â  “Being Erica Season 2 comes out on DVD September 14th.Â  But I want it now from @mikesbloggity! http://ow.ly/2xeXZ
”

Contest closes September 8th at 11:59PST.Â  You can enter both ways, but only once each way.Â  That sounds more confusing than I mean it. Essentially you can enter a total of two times.