Confessions of a Calgary Expo moderator!

This weekend, more than 60,000 fans walked through the doors of Calgary’s Entertainment and Comic Expo, (but most people just called it Comic Con.) Â If you’ve never been, I have to tell you that as a Calgarian, it’s one of my favourite things to do in the city. Not only do you get to rub elbows with cool celebrities from all over the world, you are literally surrounded by thousands of people who are just having the best time. Whether you’re in a costume or not, Calgary Expo offers up the opportunity to explore the cult world of entertainment like never before. Â And while I don’t classify myself as a geek, I do love me some pop culture and there’s plenty of that at Calgary Expo too.

This year, I was lucky enough to moderate two panels at Calgary Expo. Â When I saw the list of celebrities that were attending, I immediately emailed the organizers and asked them if I was lucky enough to moderate, I would choose someone from The Walking Dead and R.L Stine. Â My reason for those choices? Well, The Walking Dead is hands-down my favourite show and the cast is always so much fun and R.L Stine, well, he’s basically my God. Â More on that later.

Because I have a giant horse-shoe up my butt, I got both of my requests. I couldn’t believe it.

The first panel was with Michael Rooker, the baddie who played Merle on The Walking Dead. Â (If the past tense is considered a spoiler, I’m sorry.) Â Others might know him for his roles in Cliffhanger and this summer, he’ll play a major role in the next Marvel movie Guardians of the Galaxy. 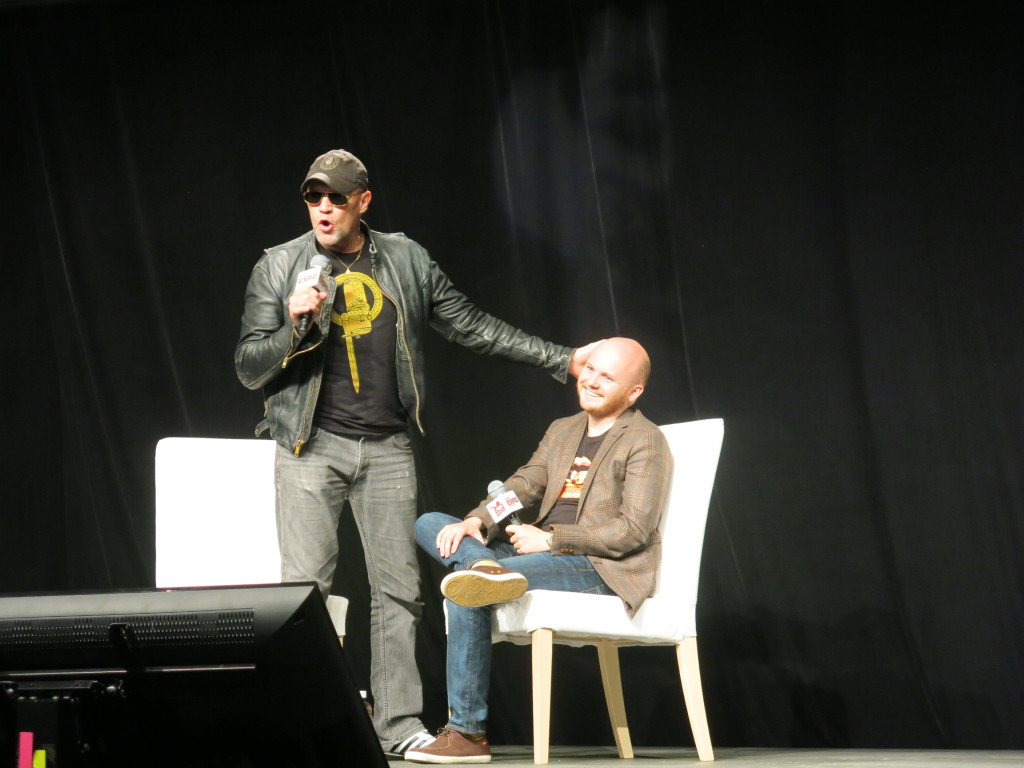 When I prep for a moderating, I probably prepare too much, like to the point where I think I know more about the celebrity than they know about themselves. This is handy, but it also causes me to overthink everything, meaning that minutes before the interview, I’m like inconsolable game of Â Trivial Pursuit. Â I also do this weird thing where when I’m really stressed, I start yawning. It makes me look bored, but really I’m terrified. Â Anyway, I pay a therapist a lot of money to deal with that stuff, you don’t need to hear about it. Â For the Michael Rooker panel I was nervous, because I knew that he was a ball of energy, which can make him unpredictable and I was right, but it was totally fun. Â He was a few minutes late, so when he got there I had to ask him a few questions about how he wanted the panel in front of about 500 people wanted to go?. He said, “Let’s do this, get on stage.”

“But, Mr. Rooker, I’m supposed to ask you questions before.”
“Get on stage, don’t worry about it!”
So out I stumbled. I had planned every minute of the panel and within seconds I had to scrap my entire plan. Exciting.

I quickly introduced Rooker, who came out wearing a leather coat, sunglasses and his back pack. His coolness was so intimidating and the audience could tell. But we were all along for the ride that was going to be this wild interview. Â And wild it was. Â For the next hour, (we went over by about 15 minutes) we fielded questions about his varied career. From how he came up with his famous Cliffhanger scene, to his favourite and least favourite moments from the Walking Dead. It was such a blast. His energy meant that he spent most of the panel walking around, sitting down every now and then, but only for a few moments. I do have to tell you this one thing about moderating a celebrity discussion. When they sit down beside you and they’re talking about whatever they’re talking about, and then they look over to you for approval or maybe signs that you’re listening, that’s the coolest thing. That means you’re on their team. That means they respect you. That means that maybe you’re friends. Maybe. Â And as someone who has every Entertainment Weekly since 1997, that’s all I could ask for.

My second panel was on Sunday and it was with the one and only R.L Stine. Who, of course, you all know as the author of the Goosebumps and Fear Street. Before J.K Rowling, Stine had kids of all ages reading. That cannot be ignored. Â It’s safe to say that the news that I’d be hosting the panel made me cry a lot. Â I cried when they told me, I cried the morning of and then I almost cried minutes before the panel began. Â I’ll tell you why.

When people talk about their idols, mine has always been R.L. Stine. Â I loved every single one of the things he ever wrote, but not because I liked to be scared. In fact, I don’t remember the books ever really being that scary. What I remember thinking was how cool it was that this adult had such a fun and wild imagination. As a burgeoning writer myself, that seemed so incredible to me. Â When you’re about 10-years-old you start to get a sense that the most fun part of your life is about to wrap up. You start getting chores, you’re parents don’t give out money as freely as they used to and no matter how much you ask, they won’t change your bed time. But reading R.L Stine’s books gave me hope. His stories showed me that when I grew up, I could still have the wild imagination I was known for in and around my parents’ house. I could think of the wildest things and maybe make a career of it. Â It was all I could as for.

In the days before the Calgary Expo panel, it suddenly hit me that I still had a book report that I wrote about an R.L Stine book in 1995. The book was called Superstitious and it was Stine’s first foray into the world of writing books for adults. I have no idea why my parents let me read it, it was pretty graphic and I’m pretty sure my teacher didn’t know what it was about. “Do you just want to write about Charlie and the Chocolate Factory again instead?”

No! Â I loved R.L Stine, so I wrote about the book about demons living in mirrors and I loved it. I got a so-so 44/50 Â on the book report but for some reason I held on to it. So when I went digging for it a few days ago, I was so happy when I found the book report and that it was in mint condition.

Flash forward to minutes before the R.L. Stine panel and I was losing my mind. I was going to meet him, he was going to learn my name and I was going to show him my book report. I think I just stood there in silence, but my brain was as busy as a mall at Christmas time. Â Then, as the crowd was moving into the theatre, one of the techs came up and said: “I don’t know if you heard, but I don’t think R.L Stine wants a moderator.” Â My eyes opened wider than they had ever opened before. I didn’t say anything, but the tech immediately took it as a sign to see if R.L Stine would have a change of heart. Now, I don’t know if the author actually said he didn’t want a moderator. Â The backstage chaos at an expo is often like an old school game of telephone. But the minutes I waited to see if I would still be a moderator were the longest of my life. In my brain, I was quickly making deals with myself. Â I decided I would have to be okay if he didn’t want a moderator. It wasn’t like he didn’t want me. He didn’t want a moderator. Anyone. Maybe I would be okay if I just got to say hello. Â Worse comes to worse, I could just yell something during his self-moderated panel. Yeah, I would yell “I love you.” He’d think that was funny, right? Â I wish I could tell you how fast my brain was moving. It was probably immeasurable. 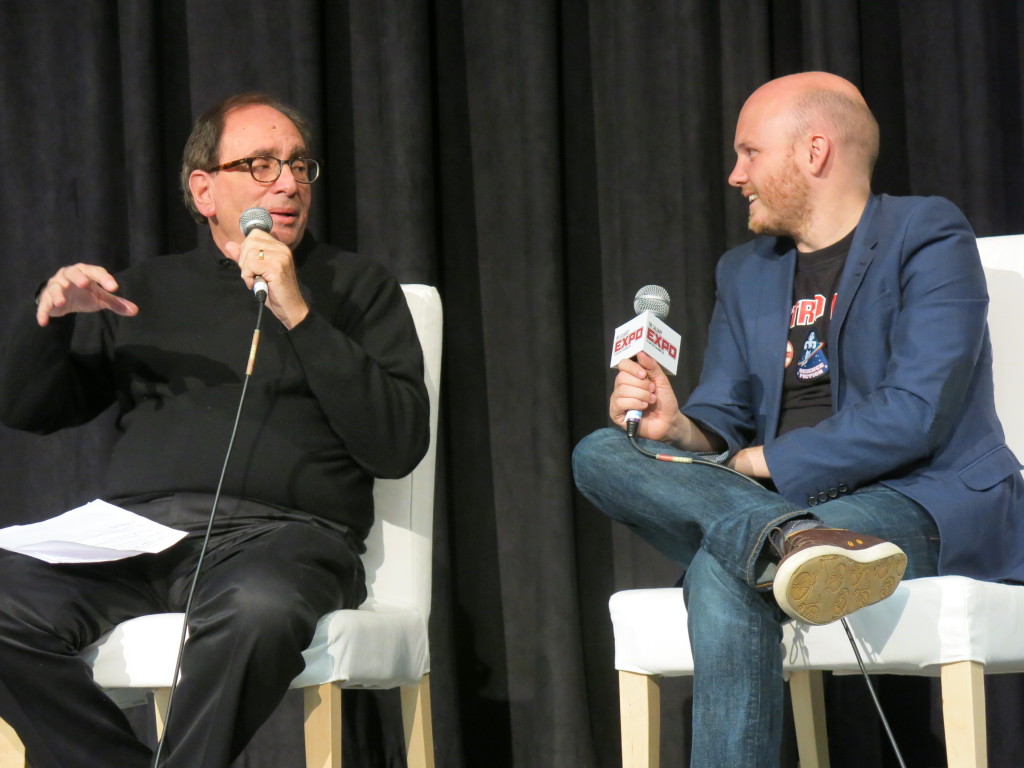 Then, the news. Â He was fine with a moderator, but he wanted to talk for twenty minutes without me. Fine. Totally fine. TOTALLY FINE. So after having a body-attack (that’s when your whole body is feeling like it’s having a heart attack) everything was going to be fine. Â A few minutes later I was introduced to R.L Stine and in the words of The Outsiders, I tried to be cool. I showed him my book report and he was surprised that I a) still had it and b) was allowed to read it. He signed it, I died. We chatted for a few more minutes and then we went and chatted with about 200 of his fans.

During his twenty minutes, he read a poem, told a ghost story caught us up on the plans for a Goosebumps movie and revealed that he’d would be releasing a new Fear Street book in August. He was quipy, funny and smart. Then he fielded other questions from the audiences and before we knew it, it was over, like that. Â We said our goodbyes and then, for the first time in weeks, I took a deep breath. I had met my idol. What a lucky life. What an amazing weekend. 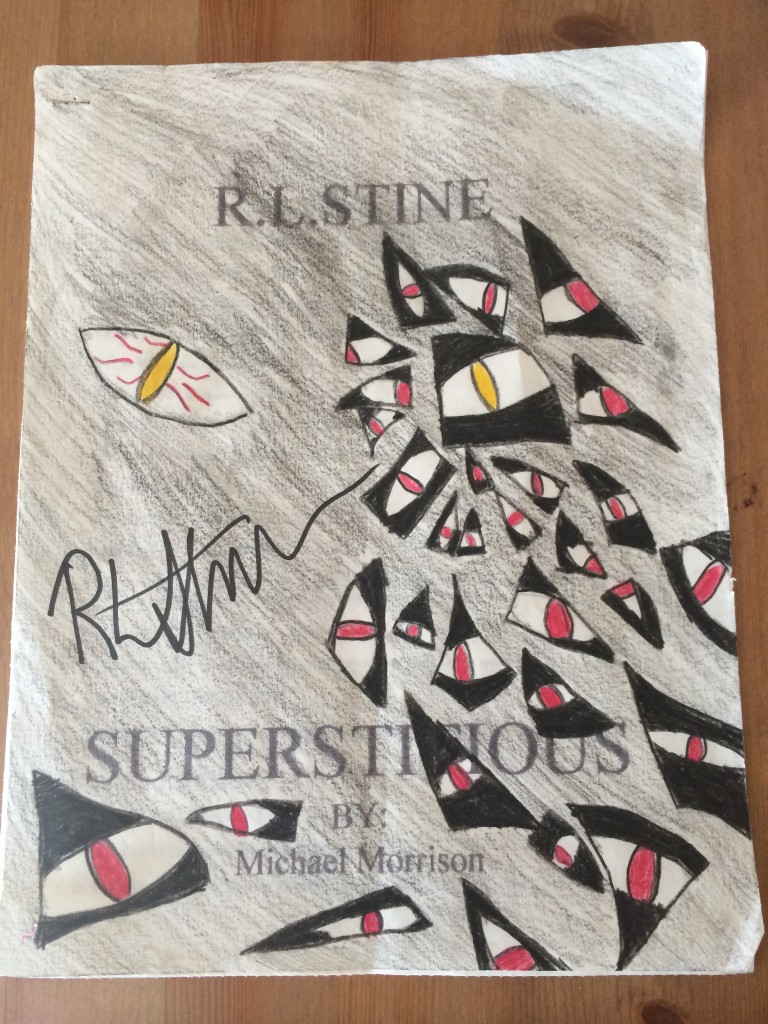