Dearest Mike’s Bloggity Blog readers,
It has been a while since I confessed something, so here is a little one for you:
I’m super greedy and never tell you about contests I enter. You’re supposed to be surprised. Why aren’t you surprised? Anyway, why do I do this? I just told you, I’m selfish and I want to win everything.
But I found this new contest on CTV.ca and I had a moment of enlightment. Since my old way of trying to win contests has so far been a giant fail, I’ve decided to go about it a different way. If I tell everyone about them, then maybe karma will reward me by letting me when the prize. Sadly, this is the best idea I’ve ever had. It’s hard knowing I’ve already peaked.
So I’m going to tell you about this cool new prize. BUT you have to promise to enter the contest. I’m hoping the CTV gods will appreciate the extra ballots. I’m not a religious person, but for this prize I will pretend to be.
This is the prize: 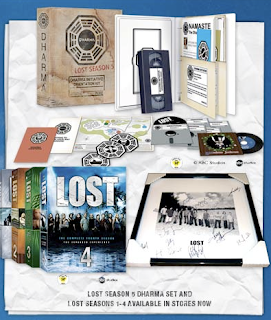 What you are looking at a LOST Limited Edition Collectors Set, A DVD Box set of the first four seasons of “LOST” and a framed print signed by the cast.

I’m not sure why they decided not to include the 5th season, but I’m not going to complain!

Click here to enter, but know that I’m hoping you don’t win.

UPDATE: I was wrong, it does include season 5. My bad. Still, you can’t win it. Thanks ClickRaise.

NEW: For the past few weeks we have been treated to a ton of season six LOST promos. But none of them have had any new footage…until now! Ladies and Gentlemen here is the newest LOST promo with ONE.SINGLE. new frame.