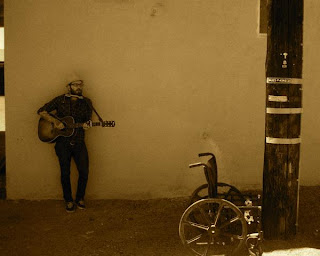 Tonight City and Colour performed to a near sold out crowd at the Jubilee here in Calgary. Â I say near sold out because at show time, there remained one singular ticket to the show. One empty seat. Â But not even one empty seat or the cold weather could dampen the enthusiastic crowd of hipsters and scenesters. Â
Earlier in the evening I had gotten the chance to talk to Dallas Green (check out the interview here) and was excited to check out my first City and Colour show, which was being presented by X 92.9
Now I’m sure I’m not the only one out of the 2400 (minus 1) fans that were there tonight, but it was all I could do to not get up on stage and give the guy a big bear hug. Â Like it or not, throughout the night I had to come to terms with the fact he seems very huggable. Â Adding to my frustration is that I had my opportunity just hours before and I missed it.
5 Reasons I Should Have Hugged Dallas Green when I had the chance.
1. Whenever Dallas joked about not feeling good about himself, I couldn’t help but think: “If Dallas Green can’t feel good about himself, there is no help for the rest of us!”
2. The way he can serve a big cup of “shut the hell up” to annoying audience members that wouldn’t stop yelling randomÂ absurditiesÂ and no one be the wiser. Â Truly killing them with kindness.
3. Green’s entire persona oozes great guy next door. Â Screw the phone book, he could sing Naomi Klein’s The Shock Doctrine and still bring most girls (and politicians) to tears.
4. After returning to the stage for the encore, Green stunned the entire auditorium with an acapella version of Â the blue grass anthem,”Don’t You Mind People Grinning In Your Face.” You could hear a pin drop.Â
5. Â City and Colour’s biggest hit is “Coming Home”. Â He saved it for the last and it was probably a good thing. Â Every time I hear that song, I become thisclose to packing up my life and moving back east. Â I purposely have never driven East on 16th Ave for that very reason. Â Hearing the song live didn’t make it any easier not going home. Â Hence the needage of a huge.
And one reason why I didn’t hug him.
1. Leaving out “Save Your Scissors” didn’t make me want to hug him any less, but maybe I would restrict it to one of those manly patting type hugs. Or the increasingly un-popular and uncomfortable side-hug.
dallas green