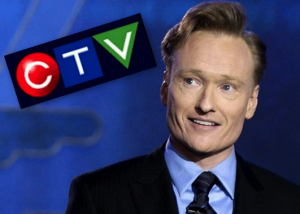 When Conan O’Brien announced that his new show would be on TBS, you could almost hear the collective sigh of Canadians all across the country, who are stuck with the always dreadful Peachtree TV.

Well good news Canada, according to the always reliable TVFMF, CTV has acquired the rights for Conan’s new show! Â They have not, however, announced when or where the show will be showing up on it’s schedule. Â CTV’s late night schedule (National News, Daily Show, Colbert) is pretty tight, so I don’t think they’ll mess with that. It could show up on the Comedy Network, but I think Conan is deserving of a bigger audience. Â Most likely, O’Brien will land on the /A\ channel, which in recent years has become a dumping ground for all things CTV and it’s crowded schedule (see: LOST).

No matter where Conan ends up, we can all start sleeping again at night, Conan will have a home in Canada and that is all that matters. (Somewhere in Canada, there is a very jealous Mike Bullard.)

Now seriously, how the hell do we get rid of Peachtree TV!