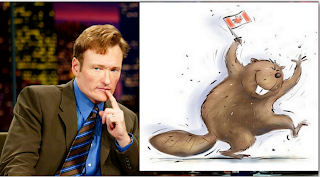 Remember a couple of months ago when you were al overl “Team CoCo!” You joined Facebook groups, your twittered up a storm and some of you even walked down your city streets naked. I’m not sure what the last one had to do with Conan O’Brien, you were naked, so I left it alone.

Well for all you Conan supporters, it is time to pay up!
O’Brien just announced that he’ll be touring North America and will be making a total of three Canadian stops:
Tickets range from $97.50 to $137.50. So if you really love Conan, then it looks like you are going to have to financially prove it.
Tickets are already on sale!
I really want to go to the Alberta show, but it is the same weekend as the Junos! Are you freaking kidding me? It’s like Sophie’s Choice, but harder!