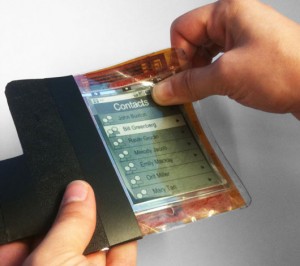 Just when I had just started to figure out my Iphone, Canadian scientists have developed the latest in mobile technology and it’s paper thin! It’s called the Paper Phone and it’s already begging for me to lose it.

I initially saw this video on The Review Crew and I immediately had to share it.Â  The scientists are from Queens University and while the technology still seems a year or two away, it’s still crazy to see.Â  One of the super small computer’s creators and director of Queenâ€™s University Human Media Lab Roel Vertegaal, explains the technology: “This computer looks, feels and operates like a small sheet of interactive paper. You interact with it by bending it into a cell phone, flipping the corner to turn pages, or writing on it with a pen.â€

Wow!Â  Seems insane to have something that skinny hold so much information.Â  Next thing you know, we’ll be using something similar for our passports. And I can’t think of a single reason why that would be a bad idea…..