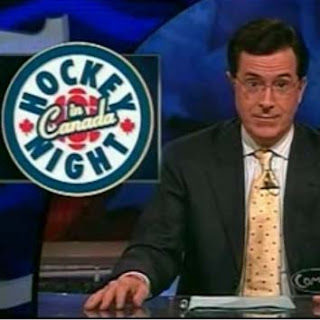 It’s no secret that Canadian love Stephen Colbert. I’m convinced that most people think they are watching Rick Mercer, but regardeless, the The Colbert Report pulls HUGE numbers night after night. And that was before it was discovered by ancestry.ca that he is Canadian!

Look out Don Cherry!
If you aren’t familiar with Colbert, he is pretty much a genius and shit-disturber all at the same time! Heâ€™s accused Canada of cheating at the upcoming Winter Olympics. He’s referred to Canadians as â€œGodlessâ€ and â€œSyrup Suckers.â€ He believes Canada is Obamaâ€™s America, and supports an American-based Ontario Hockey League team, claiming a war of Good vs. Evil between his beloved Saginaw Spirit and their Canadian adversaries.
I think that sums him up nicely.
Ancestory.ca, a Canadian family history website, announced yesterday that Stephen Colbert is actually Canadian….sorta.
Here is the story:
James Quinn, Stephenâ€™s great-great-grandfather, was born in Ireland in 1830. At some point James, like millions before and after, set sail for a better life in Canada. According to his 1851 Census record, James Quinn lived and worked as a labourer in Frontenac County near Kingston, Ontario, which coincidentally is a noted hotbed of hockey and home to proud Canadian and hockey icon, Don Cherry. Jamesâ€™ daughter Angeline Quinn married George William Colbert, Stephenâ€™s great-grandfather. Mary Skelton (nee Mary Ann Gurry) is another paternal ancestor of Stephenâ€™s. Also born in Ireland, she was Stephenâ€™s great-great-grandmother. She immigrated to the United States where she would meet her future husband Creighton Skelton. What happened next is unclear, but at some point Mary ended up moving north of the border, where she would live out her last days. According to her Ontario death certificate, Mary Skelton passed away on June 29, 1880 in Haldimand County, near the shores of Lake Erie. Mary and Creightonâ€™s daughter Elizabeth Skelton married Hugh Tormey. Their daughter Mary Tormey married James W. Colbert Sr. â€“ Stephenâ€™s grandfather.
Got that? It reads like a 200 year old version of Gossip Girl. XOXO John. A MacDonald.
How crazy is this website that it was able to find out all that scandalous information!? I think I may use it to do some research. I’ve always had a sneaking suspicion that I’m the love child of Randy Machoman Savage and Miss Elizabeth, I think this might the time to prove it.
Welcome to our country Mr. Colbert, hope you have a warm coat.