Classified is about to explode! 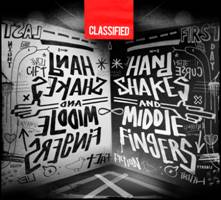 Everything is coming up Classified!

It’s been a while since we’ve heard anything from Canada’s other rapper Classified but it looks like he will be roaring back in a cross-country take over!

On March 24th, Classified is set to embark on a national 22 date tour in support of his soon to be released album Hand Shakes and Middle Fingers! Shockingly, this is his 12th studio album! TWELFTH!

If the new album and a big tour wasn’t enough, Sony has just released Classified’s new single on the called â€œThat Ainâ€™t Classyâ€ (listen here). Which after listening to it a couple of times, I’m happy to confirm is not about my prom night! Hoozah!

Here are the confirmed tour dates for the Classified tour!Â  I got the chance to see him at last year’s Junos and let me tell you, this guy knows how to put on a show.Â  This has already become one of my must see tours of the year!!!