Chris Jericho Dances with The Stars! 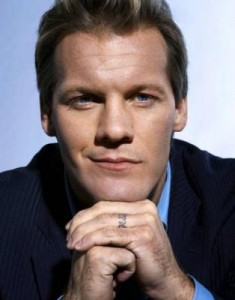 ABC announced that cast of the next season of Dancing with The Stars tonight!Â  Usually I wouldn’t touch this announcement with a ten-foot pole, but there is one contestant of note that’s worth mentioning:

Winnipeger and WWE champion Chris Jericho made the cut and will now be competing against the likes of Ralph Macchio, Kirstie Allie, Wendy Williams, Sugar Ray Leonard and Kendra Wilkonson. I’m embarrassed that I typed Kendra and Sugar Ray in the same sentance.

Let’s hope it goes better for Jericho the his last foray into reality television, when he competing in Celebrity Duets back in 2006!Â  Holy shoot, I bet you’re wondering why I remember that!Â  Well I was actually at the first taping of that show in LA and it’s kinda the reason I started the blog in the first place.Â  You see, I wanted my friends and family to keep track of my four day trip to Los Angeles. Yes, I was (am) that self-important.Â  (Click here to read the post.)Â  Sadly Chris Jericho was voted out on the first episode, which was a little awkward since I was there with his cousin.Â  Such a crazy time.

Anyway, Jericho is ridiculously charismatic, which means the soccer-moms are going to love him! I think he’ll stand a real chance!

Does that mean I’m going to watch?Â  Not a chance in hell!