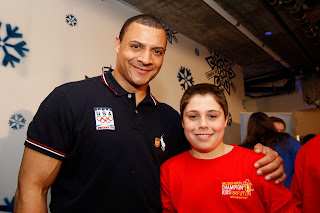 The other I introduced you to the amazing Ty Wager. He was the inspiring kid chosen by McDonald’s to be a a part of their Champion Kids program.
Since he was going to be experiencing the Olympics like no one else, I asked him if he could write me some blog posts about all the crazy and fun stuff he was doing.
If you missed his first one, click here to read it.
Ty’s new post is about his last two days in Vancouver.
It sounds like they were more eventful then his first few days…if that is even possible.
Check out Ty’s blog post and pictures below. If I’m not careful, I’m going to have to watch my back. This kid is good!

Saturday we started off an amazing day by going to the Olympic Richmond Oval to see some great 5000 meter speed skating. It was crazy how Fast t the athletes skate. They train all of their life for one moment that comes every four years. But it was amazing. Third up were the American skater and Denny Morrison. He did well with the American taking over first place but Denny right behind him. Eventually Sven Cramer from the Dutch would go and he would finish in first place setting a new Olympic record and taking home the gold. It was too bad Canada didnâ€™t medal but it was an amazing experience and we were just heading of to another one. The ATHLETES VILLAGE!! 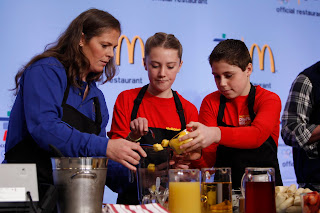 Saturday afternoon after a short bus ride to the athleteâ€™s village we got our access passes and went into the high security area where we werenâ€™t aloud cameras, video tapes or anything. When we got in we were greeted by the USA womenâ€™s hockey team goalie and center. They were really nice and signed autographs whenever you wanted them too. They also traded pins with us it was amazing. On the way out of the village I saw Jari Kurri. He was really nice and I asked him a few questions about his hockey life. Then we had to go it was an amazing time and we had just one more stop at the USOC House where we were presented our medals and had the opportunity to be on TV in a DANCE SHOW with Picabo Street and Ronald McDonald. Then Shawn Johnson came in and she told me to hold something and then she showed me how to slow dance it totally caught me off guard and I didnâ€™t have a clue what she was doing. It was still fun. My time in Vancouver was just amazing and it is sad that I have to come home today at five but knowing I still have these great memories it will still be fun. Iâ€™d like to thank McDonaldâ€™s for all the great work, the people who worked with me, Mr. Rankin for the nomination, My Parents for the support and all my family. 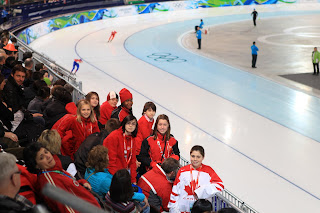