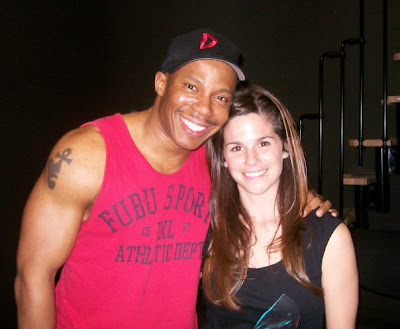 My uber-talented friend Natalie Roy moved to L.A a couple of months ago for pilot season and by all accounts she is having a great time and getting her name out there. Â She met tons of cool people and had a funny celebrity encounter that I had to share!

Many people remember Erik King as Sergeant James Doakes, the cop who was a thorn in Dexter’s side for the first two seasons of the addictive show. Â Well Natalie was in acting class and she turned around and who should she see? Well none other than Sgt. Doakes himself.

“He is actually the funniest, one of the nicest, most casual, fun “celebs” I’ve met. He was a riot. We were doing a police tactics class together and he and I were doing a search and take down of an armed criminal. we had so much fun….he wanted me to hold the shotgun…hot.“

I don’t know about you guys, but I smell a buddy cop comedy!