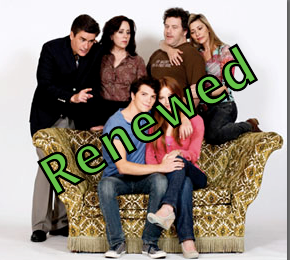 We will still have to wait another month until CBC officially announces their fall schedule but Bill Brioux’s at TV Feeds My Family is already making some bold predictions. Apparantly he has a guy on the inside who confirms that shows like 18 to Life and Little Mosque on the Prairie have both been renewed. So has This Hour Has 22 Minutes which was thought to be on the bubble, although it will only return for a short 13 episodes.

Oddly enough, The Ron James Show got picked up for season 2. I say ‘oddly’ because my grandmother hated it, and if old people don’t think Ron James is funny, who does?

Still no word on Being Erica…..yet.