Casting Call! The Bachelorette Canada is looking for a few...

Well this is going to be fun!

The Bachelorette Canada National Casting Tour starts in Vancouver today and will be making it’s way across Canada with stops in Vancouver, Calgary, Winnipeg, Toronto, Montreal, and Halifax.

So far we’ve been treated to two seasons of Bachelor Canada, but this is the first Bachelorette Canada. So far there’s no word on who the bachelorette is, not even if it’s a girl from the first two season of the Bachelor, which is typically what the american edition does.

The casting call is looking for charming, adventurous, charismatic men looking for true love that are up for this once-in-a-lifetime opportunity.

Casting is taking place at the following locations:

If you’re thinking of going, and why wouldn’t you, bachelors must beÂ Canadian citizens or a permanent residents of Canada and over the age of majority. BeÂ sure to bring valid photo ID (either of the following: (1) passport or (2) birth certificate, driverâ€™s license, or government issued photo ID). Please bring originals only. Dress to impress and avoid wearing white, black, busy patterns and clothing with logos.

The Bachelorette Canada premieres on The W Network this fall. 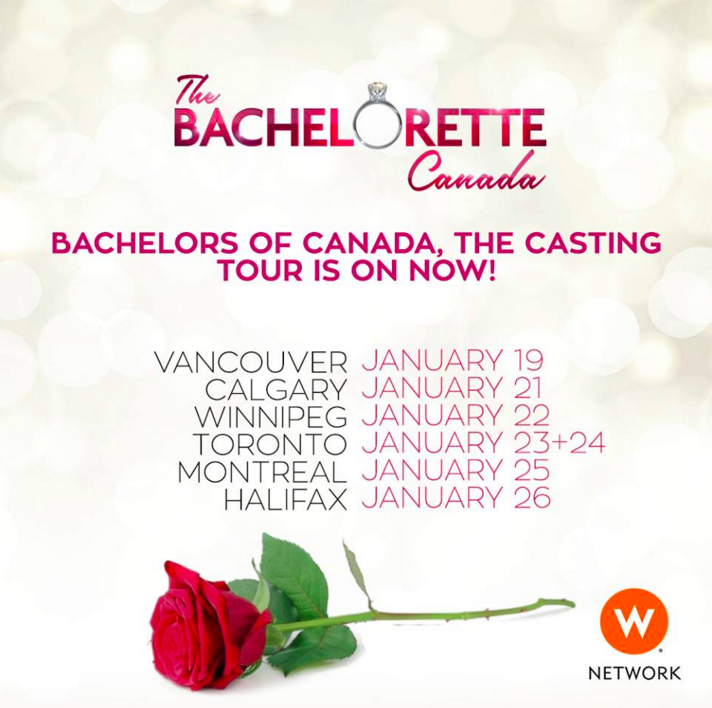