Carly Rae Jepsen: Anything but Idle 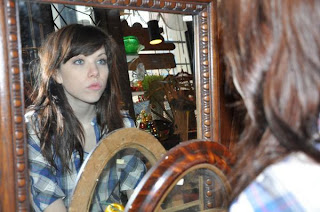 You don’t often hear much from any of Canadian Idol winners after the confetti slowly stops falling from the rafters. You hear even less from the runner ups and third place finishers. Luckily Carly Rae Jepsen seems to be bucking the trend.

When the 5th season of Canadian Idol came to an end, Jepsen had many opportunities in front of her, she could have made some rash decisions. Instead she took her time. And now, two years after her Idol run, the BC native has her first independent CD, Tug of War and a slow-burning single that currently sits on the Top 20 lists across Canada.

Jepsen is currently on tour with fellow Canadian acts Mariana’s Trench and Shiloh. At her recent stop in Calgary, I got the chance to talk to Carly Rae while sitting in a dark stairwell about life after Idol, traveling the country and why she threw up the first time she heard her song on the radio.

Your first tour across Canada was with your Canadian Idol finalists. And now you are touring with Mariana’s Trench and Shiloh. How is this tour different?
You can’t compare it to the first one, it’s so night and day. It’s a different ball game, I’m promoting my own music, I’m touring with a very successful band. I’m learning about merchandise, about audiences, about what it takes to get from hotel to hotel with a sketchy GPS. It’s a little more gruelling, it’s not as cushey the Idol Tour.

Some people regret being on Idol what are your thoughts?
It was a great opportunity to meet everyone in Canada and get my name out there. But, it wasn’t representing the type of music I planned on making. It was more playing covers and being on a tv show. But also I write songs and I kinda of have a style in mind. I loved Idol. But I don’t want it to be the one thing I did in my life, I want it to be apart of my story. I don’t deny it, I know a lot of people have a full on hate on for the show once they are kicked off, I don’t feel that way. I feel like it would be silly to not recognize it as a great opportunity. I hope I can look back in a few years and know that I used it properly.

Creatively, were you happy not to win?
Yeah I felt that way. It was a blessing in disguise. I don’t think I would have been very happy doing cover songs. I enjoyed having more time to work on my music. Writing my own music was a critical factor for me. That is why I’m with the manager I’m with. I knew I wanted to put out something original.

Do you have many HOLY SHIT moments?
Everyday. I’ve been very blessed. I get to live my dream life. It’s exciting because there are unexpected parts and there are some tough parts. But at the end of the day, you weigh it out with the gain and the gain for this career is totally worth it.

What have been the biggest challenges?
The business side to it all. You can’t really play dumb if you want to have longevity. You need to start thinking about what your getting yourself into. I won’t pretend I know more than I do, I’m still learning. I’m proud that I’ve taken on learning everything from song writers credits to merchandise. One of my idols is Jann Arden because she is such a business woman. Half of this tour is also a learning process. I get to travel with some great artists and I pick their brains about how they’ve done this because they really have developed a loyal fan base from level 1.

Coincidentally, you are signed to the same label as Jann Arden.
Actually, I only have a promotion and distribution deal with Maple, I’m actually still unsigned. Which is so rare nowadays.

WHAT?! But you have a hit single!
It is a decision I made right after Idol. After the show, Theresa Sokyrka (Canadian Idol 2 runner up) suggested that I talk about getting a promotional and distribution deal. Because this day in age with the record companies crashing, we weren’t necessarily sure if signing would the smartest deal.

So how did Tug of War become such a hit?
I have two amazing managers and a great group of people who are guiding me. I do everything I can. Whether it’s going to radio stations, doing the one on one thing or signing autographs things like Juno Fan Fest.

What’s it like hearing your single on the Tug of War on the radio?
It’s a thrill every time I hear it! The first time I heard it is was actually hilarious. I had just gone out with my friends and I tried gin martinis for the first time. We were heading home and I got car sick at the same time that my song came on the radio. My friends were howling, it was hilarious.

On this tour, you are doing show 6 nights a week. How do you keep up?
It’s my favorite type of lifestyle. I love it, I don’t ever want to stop. Yeah it’s crazy because every day is a little different, but it’s my idea of heaven. My worse case scenario is the 9-5, monotonous over and over. Waking up and already knowing what your day is going to be. I love the spontaneity and the chaos of this lifestyle, I love the rush, I love that there is always something to do. I love meeting and having conversations with people who are passionate about what they do.

Is there anyone you dream of listening to your music?
JOHN MAYER! I wanted to write a record that was sort of a girl version of John Mayer’s music. He is just so relatable to so many people. If I could be a mix of Feist and John Mayer thing, I would be happier than anything. I would lose it if either of those two guys listened to it.

Since Canadian Idol has gotten canned, what advice do you have for young artists who were counting on the show for their big break?
I’m still working on the formula. But the best advice I could give would be to do whatever it is that makes you different as an artist. Whatever you have to offer that is unlike anything, make that your ticket in. Anyone can sing, so what is it about you that only you can do? Follow through on every business card you get, knock on every door. Follow every road, some will pan out and some won’t. But you don’t know until you try. I knew I had a limited amount of time that came with being on Idol and I didn’t want to throw it away. I wanted to look back and say that I did everything I could. I’m trying as hard as I can.

Do you get recognized anymore?
No so much anymore. During Idol it was crazy. I don’t think I liked that. It was fun for five minutes but then it freaked me out a little bit. I didn’t expect that I wouldn’t like it, it was a little crazy. People would be like “You look like that Carly Rae Jepsen girl” and I would say “Weird”. It’s very excitng now when people come up, because it’s not for Idol. It’s because of my music, it’s so flattering and s
o wonderful, I can handle that. I would be happier if I could have a career in music and no one new my face. It’s sort of an impossibility but maybe in baby steps.
*****
And almost like clock work the bar’s manager walks by and says to us: “If you guys aren’t with the show you have to leave.” Carly laughs and I quickly respond: She is the show.

Carly’s debut CD Tug of War is available on Itunes. 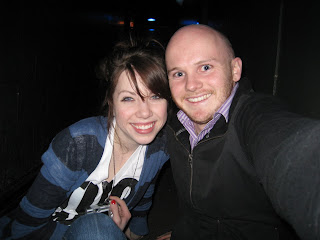 Check out other interviews with Sarah Slean and Matthew Barber