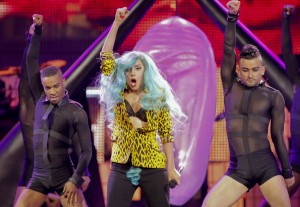 Well colour me surprised, I guess now that summer is finally here, I thought that Canadians would turn off their TVs and actually get outside and enjoy it! But if the ratings for this week’s shows are any indication, viewers above the 49th parralell have done anything but!

MMVAS: The MuchMusic Video Awards had their biggest year ever, with more than 1.1 million viewers tuning in to barely hear Sarah Taylor and the rest of the VJs hand out awards to stars like Selena Gomez, Justin Bieber and Lady Gaga! That’s up more than 10% from last year! Anytime any show has increases like that, you know there is some network executive in Toronto eating their Beaver Tails in smiles!

SYTYCD Canada: The next night, CTV’s execs were celebrating the big, big, big return of So You Think You Can Dance Canada, which had more than 1.1 million viewers check out the country’s best dancers.Â  That’s up more than 11% last year.Â  Given the size of this country, I’m pretty sure if this show goes on much longer, we will all have auditioned at least once.Â  Either way, for a reality show, any increase is welcomed news!

Combat Hospital: Global TV did it again!Â  Their new summer drama premiered last night to record audiences, with more than two million homes tuning into to watch an Etobicoke-filmed show disguise itself as Kandahar.Â Â  The ratings weren’t as impressive in the states, but the show doesn’t seem to be in any trouble of being cut short this summer!Â  Combat Hospital had the highest debut of any show in 2011, it unofficially also has the worst name.

All this sets up for a HUGE return for Global’s Rookie Blue season premiere on Thursday night,Â  which has been getting a big push on its Canadian network and ABC, which is airing it across the fifty states.