Canmore: A place to stay…for a while.

As you may have previously read, I got to spend this past weekend in Canmore, Alberta.Â  Although it’s only an hour from Calgary, I rarely get to spend that much time there.Â  Usually it’s for a quick lunch, or a break between hikes.Â  But with the Canmore Folk Festival in full swing, I thought it would be fun to stay for the entire long weekend. It was easily theÂ  best decision of my life…besides shaving my head in university, that is.

While in the city…sorry town, for the weekend I stayed in two very different, yet very awesome hotels.Â Â  They were nice enough to put me up for a few days, and boy am I lucky that I got that opporutnity. 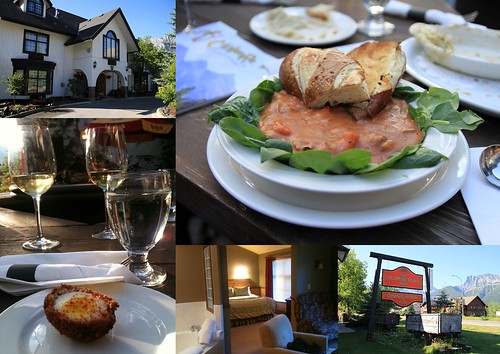 The first night I stayed at the Georgetown Inn.Â  I don’t like to do too much research before staying at a place because I like being surprised.Â  But I had seen photos and assumed I was going to be staying in one of Canmore’s most historic hotels.Â  Turns out you should never judge a book by its cover, because, while it may look older, it’s actually only 15 years old.Â  The English style hotel was built in the 90’s and captures perfectly the feel of an old English Inn, but with the modern amenities that we’re all so used to.

The location of the hotel was perfect, the room was beautiful, but what I really want to talk about was the food.Â  If you’ve never been to England, you’ll only have to drive as far as Canmore to try traditional English fare.Â  My friend and I quickly tore through the menu, eventually fighting over what we thought was best.Â  If you go, I’d suggest experimenting with the menu, try something a little off the beaten path.Â  We both drooled for the Scottish Eggs (Hard boiled eggs, wrapped in sausage and breadcrumbs and dipped in Guiness BBQ sauce.)Â  Also surprisingly good were the Elk Balls, correction, Elk Meatballs.Â  Think regular meat balls, but with Elk.Â  Don’t think about anything else.Â Â  For me the culinary highly was the Rabbit Scouse (or rabbit stew.) Flavourful, delicious and given the city’s current rabbit problem, especially satisfying. 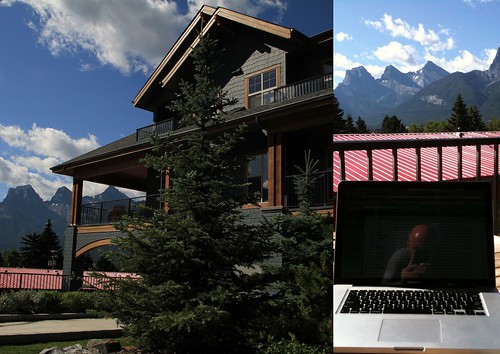 The rest of the weekend was spent at the ultra modern and ultra beautiful Silver Creek Lodge, a place so nice, it had me looking at real estate in Canmore, just so I could sneak into one of their three outdoor hot tubs.

When you stay in the mountains, there’s one thing that is more important than anything else, and the Silver Creek Lodge more than satisfiesÂ  my need to lie in bed and watch the mountains, the sunrise and the sunset. The patio was spacious and with the free wifi, I was able to get some work down, while looking over some of the most scenic views in all of Alberta.

We didn’t get a chance to try out the spa or the restaurant, I think mostly because we felt so comfortable hanging out in our hotel rooms, which were packed with a HUGE bathroom, full kitchen and a washing and drying machine.Â  It almost made me wish that I had brought my laundry with me…almost.

It was an amazing weekend, made even more perfect by relaxing stays in some great hotels. I’m not sure if this really holds any weight, but The Georgetown Inn and The Silver Creek Lodge are definitely Bloggity approved!