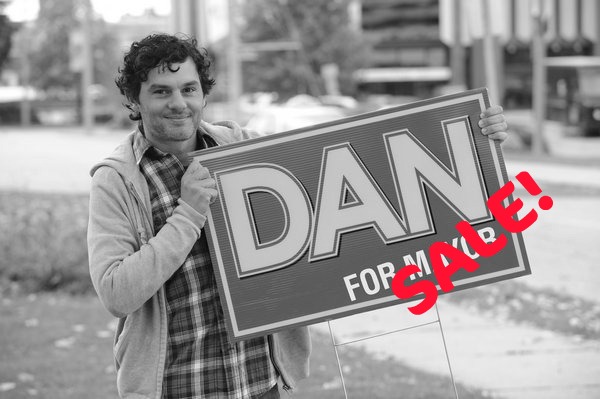 Ohhhh CTV you’re so sneaky!Â Â Â  How else do you explain the decision to announce that you’ve canceled one of your few Canadian properties 1) On a Friday and 2) on the opening day on TIFF, when you know you’ll know it get buried.

Well luckily for you, Bloggers don’t know what Friday means and I really don’t care about TIFF, so I caught ya!

The star of Dan for Mayor, Fred Ewanuick tweeted on Friday about the show’s demise, saying “Disappointed that D4M won’t be back on #ctv. Hope I get to work with all those amazing folks from the show again. Pretty upset actually.” Ever the optimist, kinda like his characters he’s known for, Ewanuick said a few hours later, “Thanks to all you for the kind words. That’s the Biz. I’ll do my best to find a way to entertain you all somehow.”

While the move isn’t necessarily surprising, CTV didn’t do much for the show, putting it on during the summer and on Sunday nights at 7:30pm, it’s certainly disappointing.Â  You know, the final nail in the coffin and all that stuff.

Bill Brioux wrote a story, saying that there’s a chance that Rogers and Citytv might pick up the show, but I’m guessing that’s the same talk we always hear after a show is canceled. Yes, I’m still waiting for that Veronica Mars movie.

No word yet on CTV’s only other Canadian comedy, Hiccups, which regularly received lower ratings than Dan for Mayor.