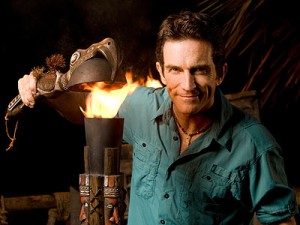 Ever sinceÂ  Survivor premiered more than ten years ago, Canadians have been desperate to get on the best reality show on TV.Â  Heck, “If I was on Survivor…” has been a boring party ice breaker ever since the first torch was put out twenty-one seasons ago. But no matter how many times we begged and pleaded, it seemed that Canadians would never be able to go on the show, (with the exception of Kel “The Beef Jerkey” guy from season 2, a Frederictonian with duel-citizenship.)

Well Jeff Probst finally addressed the issue on his blog and answered the question we’ve always been wondering, would those north of the 49th parralell ever get a chance to find the hidden immunity idol?:

â€œThis is a very common question, and so many of you from all over the world asked the same question! The issue surrounds the â€˜rightsâ€™ to the Survivor format. Mark Burnett/CBS only have the rights to do an American version of Survivor. This means you have to be an American citizen. As you noted, there are other countries, including South Africa that do their own version of Survivor. None of them as exciting as ours of course! By the way, we have several South Africans on our crew â€” good people!â€

So it doesn’t look good for we poor Canucks.Â  Our only hope is that Global realizes the huge ratings would be worth the massive expense that it would cost to film their own version of Survivor.Please Global, pretty please!

But I only have one request: IF that were to ever happen, could we please keep Jeff Probst.Â  And if not him, can I recommend Daryn Jones?

Until the next Tribal Council, all we can do is wait.
(story via reality blurred)