Canadians in the running to be The Paradise Hunter! 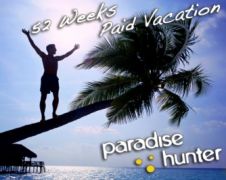 Remember a couple of weeks ago when I told you about that new contest called Paradise Hunter?Â  You don’t?Â  You’re right, it’s been a while.Â Â  Here’s a recap:Â  Paradise Hunter is a show that will be filming from exotic locations from all over the world.Â  The show’s producers have opened up the casting of the host to anyone and everyone that would like to apply by 1-minute video submission.Â  They’ve asked people from all over the world to vote for their favourites.Â  The eventual winner gets to travel the world, host the Paradise Hunter show all while getting paid $60,000!

The website is still taking submissions and right now two Canadians are place in second and third place!

One of these contestants is Ben Gamble who is sitting very comfortably in the number three slot. Not bad for a contest that has already garnered thousands of submissions.Â  Check out Ben’s video below:

According to Ben’s profile, “he’ll give at least half my ‘earnings’ towards improving the lives of orphans in Benin, West Africa. I’d pay off my student debt ($15,000) and give at least $30,000 to charity. And that’s the truth!”

If you want to vote for Ben, click here.

Other Canadians in the running for the top spot include Carlyn, Chelsea and Kristin, all who are from Alberta.

It would be great to someone from Canada hosting a show that will be seen all over the world!!!