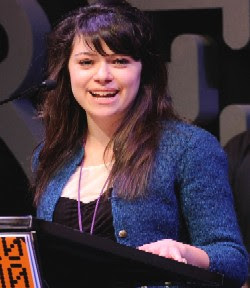 While the world’s best musicians were celebrating the Grammys, one of our Canadian actors was winning a pretty big award herself.

This weekend at Sundance, Regina’s Tatiana Maslany won a Special Jury Prize for Breakout Performance in World Cinema for her role in Grown Up Movie Star.
Not too bad for her debut big-screen role!!
In the movie, she plays a teenager in the midst of a sexual awakening. (Weren’t we all?)
Fans of Being Erica may recognize her as Dr. Tom’s daughter. She also played Kit Bailey on the popular Heartland series.
The movie started playing in Toronto and St. John’s (where it is based,) this weekend. Hopefully the win means it will be available to watch in more cities soon!
Congrats Tatianna!