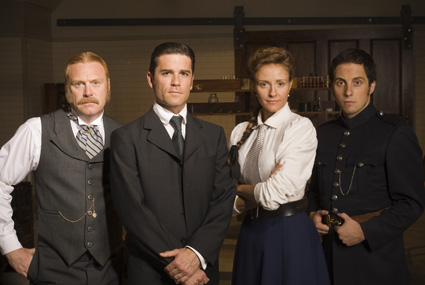 Holy crow, what is going on with Canadian television?  It seems nowadays, no series is safe!

Citytv have confirmed that the upcoming fifth season of Murdoch Mysteries, will indeed be its last.

The series, which is like CSI but in the 1800s, made national headlines earlier this year, when it featured a cameo by Stephen Harper.

Looking on the bright side, fans of the show will be happy to know the Murdoch Mysteries is currently still producing its now final season, so they can look forward to having a proper send-off and not be left to deal with a huge cliff hanger or unanswered questions. The final season will also feature some great guest stars like soprano Measha Brueggergosman and Aaron Ashmore.

The cancellation is another blow to Canadian productions, which are still dealing with the recent loss of Dan For Mayor, Hiccups and So You Think You Can Dance.

What do you think is going on?  I’m trying to be optimistic and tell myself that a whole new batch of awesome Canadian shows is right around the corner, right?  RIGHT?!?!