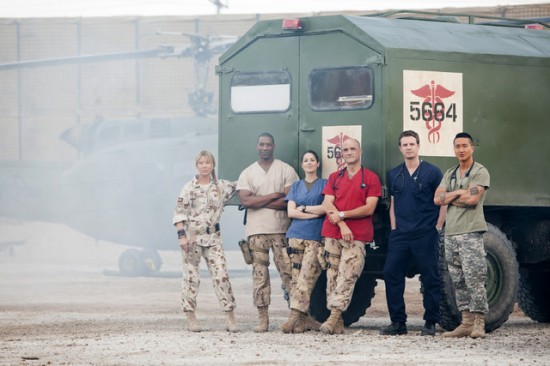 With only two weeks left of 2011, the Canadian television industry must be really looking forward to this year being over.

In the past 12 months, they’ve seen the cancellation of so many Canadian productions and now they can add one more to the list.Â  TV writer Bill Brioux has confirmed that Global’s Combat Hospital has officially been canceled.Â  Although it pulled in great numbers in Canada, especially for a summer series, it never picked up any steam on ABC in the States and when the American network opted not to pick the series up for a second season, production was shut down for good.

It’s too bad that Global has decided to not continue with the series, because the number were definitley good enough to remain a Canadian only production.Â  After all, CTV decided to keep producing The Listener after NBC aired it for only one season.

This year, the graveyard that is the Canadian Television industry already includes So You Think You Can Dance Canada, Dan For Mayor and Hiccups.Â  Murdoch Mysteries was also canceled by CityTV but CBC has since announced that it will now air the series.

Up next for Global is The Firm, which premieres in January.Â  With a huge push of support from NBC, this show should have more success than Combat Hospital.