Canadian HULU on it's way! 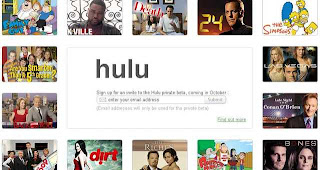 I just got my Christmas Gift from Rogers: It’s Canadian Hulu site!

Yes, that is a tear coming down my face. I’m so happy.
If you don’t know what HULU is, it’s basically an ad-supported online video service. NBC has been using it for a couple of years and it’s amazing. Not only does it have TV shows, it also has full length movies.
Up until now, the site has been blocked for Canadians (even if you use an ISP blocker), but block will essentially be lifted (thanks to Rogers) on November 30th! The content will not be NBC content though.
“We’re no longer in the cable TV business. We’re in the video entertainment business,” said Dave Purdy, vp of video product management at Rogers, as he unveiled a beta version of Rogers On Demand Online Monday night ahead of the national rollout.
Rogers will offer its cable and high-speed Internet subscribers access online to an initial 15 channels which it owns in whole or partly, including Citytv, Rogers Sportsnet, A&E Canada, Bio and G4 Canada.
Great day for Canadian TV lovers like me!