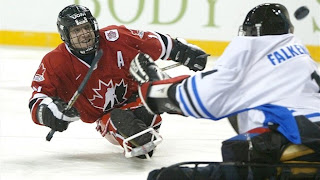 Let’s all take moment to raise our morning Screwdrivers to Jean Labonte.

He is the captain of the Canadian sledge hockey team and he will also be the flag-bearer for Canada at the opening ceremony of the 2010 Paralympic Winter Games on March 12th!

Labonte is no stranger to the games, he has already competed in three Paralympics. In 2006 he won a gold medal, a silver in 1998 and bronze in 1994.

Now that is what I call owning the podium!