Can Degrassi save the Soap Opera? 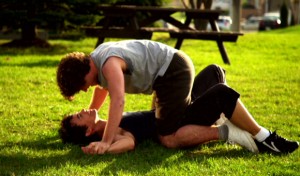 You don’t have to be on EI or a housewife to know that the Soap Opera is dying. Â In the age of Tivo, PVR and Reality Shows, Soap Operas seem to have lost their place. Â In the past ten years we’ve seen the cancelations of Guiding Light, Another World, Passions, Port Charles and As The World Turns. Â Do you know that a new Soap Opera has been created since 1999?! Â Which leads me to question, what the hell are people watching on their summer breaks?

But don’t start making funeral arrangments for the Soap Opera yet, if they’ve taught us anything, anyone and anything can come back from the dead. Â Case in point: Degrassi.

Since premiereing in its new daily format two weeks ago, the show has been bringing in huge ratings and even bigger drama. Â  Things actually progess on this new form of a tele-novela. More importantly they are bringing in the young viewers which means money, money, money for MuchMusic’s owner CTV.

The secret behind Degrassi’s success can be directly places on its writers. Â Over the past ten years they have perfected how to tell a story with lots of progression at a lightening fast pace!

For example, in the past two weeks, the following as happened:

Seriously all that happened in eight episodes. Â Talk about progression. Â So while the Soap Opera is definitely on deaths door, Degrassi has proven that if these shows pick up the pace a little bit, there can be hope for shows like Days of our Lives and General Hospital yet! Â And if all else fails, hire Pat Mastroianni.

Check out the promo for this week’s episodes: