Calgary radio stations battling it out for the love of...

Everywhere you go today in Calgary, everyone seems to be talking about Justin Bieber. The Canadian pop superstar brings his big show to Calgary tomorrow and since it sold out in minutes, parents, tweens and kids alike are clamouring to get their hands on a pair of coveted tickets.

In recent days, the battle for tickets has brought two local radio stations in a head to head battle for listeners, who’ll seemingly do anything to go to the concert at the Saddledome tomorrow night. Virgin Radio has twice challenged Calgarians to intense challenges to win tickets to the show. Earlier this week, Ashley and Shelly battled it out over turkey. Whoever ate the most turkey in one hour, won the tix. In the end, Shelley managed to eat 3lbs 3oz and Ashley swallowed down on 2 lbs 5oz. Later, Ashley posted on the Facebook that she threw up for the rest of the day.Worth Justin Bieber tickets? I don’t know.

The second challenge saw Calgary father Adrian spend 24 hours in a porta-potty listening to the same 4-second Justin Bieber loop over and over. He was doing so, so his daughter Shayden could win tickets. The challenge was made further torturous because of the temperature outside, which dipped well below the freezing mark this week.

That’s when Virgin’s main rival, Amp Radio did this:

Ryan, co-host of Amp’s morning show promised the father two tickets to Justin Bieber, plus a meet and greet and all he had to do was leave the porta-potty. You’d think he’d step right out to avoid Virgin’s tortuous challenge, but Adrian didn’t take AMP up on their offer and continued to spend the rest of the day listening to the same four second loop. In the end, he won the tickets, after listening to that “Baby, Baby, Baby” more than 21,000 times.

If you haven’t been following these stations lately, you’d probably be surprised that AMP Radio would so blatant in their attempt to try and ruin their rivals contest, but AMP has been going after Virgin for months now, with controversial ads on their station declaring how many more songs AMP plays than Virgin. (Sometimes, it can be up to two hours more.)

It’s certainly the first time I’ve ever heard one radio station go after another in such a public way. Perhaps more controversial than anything else, was this tweet that was sent out to AMP’s 8,000 followers last month. 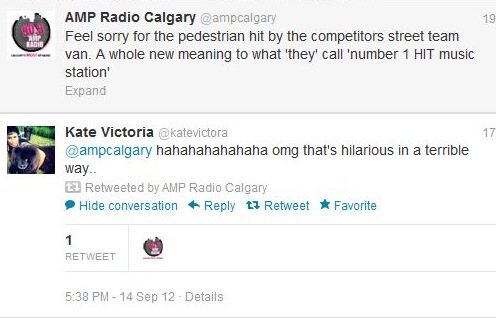 For their part, Virgin has pretty much been taking the high road, with the exception of re-tweeting the odd tweet about Virgin being better than Amp. But maybe that’s because they don’t really have anything to worry about. As it stands now, Virgin continues to beat AMP in the ratings. During the last ratings period Virgin was on top with a 7.7 market share and comfortably ahead of AMP’s 5.1 of the market share.

As a listener of both, it’s sorta fun to see the two radio stations try to liven things up. As a bigger fan of social media, it’s interesting to see how the back and forth jabs are playing out, long after the on-air light goes off.