Calgary named the fifth most liveable city in the world,...

Today is an exciting day to be a Calgarian because The Economist just placed our city in the top 5 most liveable cities in the world, and you know, I agree. The Global Liveability Report for 2017 looks atÂ liveability rating for every city. The liveability score is the combination of the factors surveyed across the five main categories:Â Stability Healthcare Culture & Environment Education Infrastructure.

This year’s top five were:

Calgary scored 100% ratings in the categories of stability, health care and education.

Rounding out the least liveable cities in the world wereÂ Kiev, Douala, Harare, Karachi and Agiers.

You may have noticed if you’ve read this blog before, that I’m incredibly proud of living in Calgary. It’s hard to believe that it’s been 12 years since I moved to here, and since we just bought our first home last year, it doesn’t look like I’ll be leaving any time soon. One of the reasons I love living here is because it feels like a city that’s constantly evolving. The Calgary I moved to 12 years ago, is not that the Calgary I live in now…which is a good thing. Â With that in mind, I wanted to celebrate the city’s achievement by sharing with you some of my favourite things about living in Calgary. 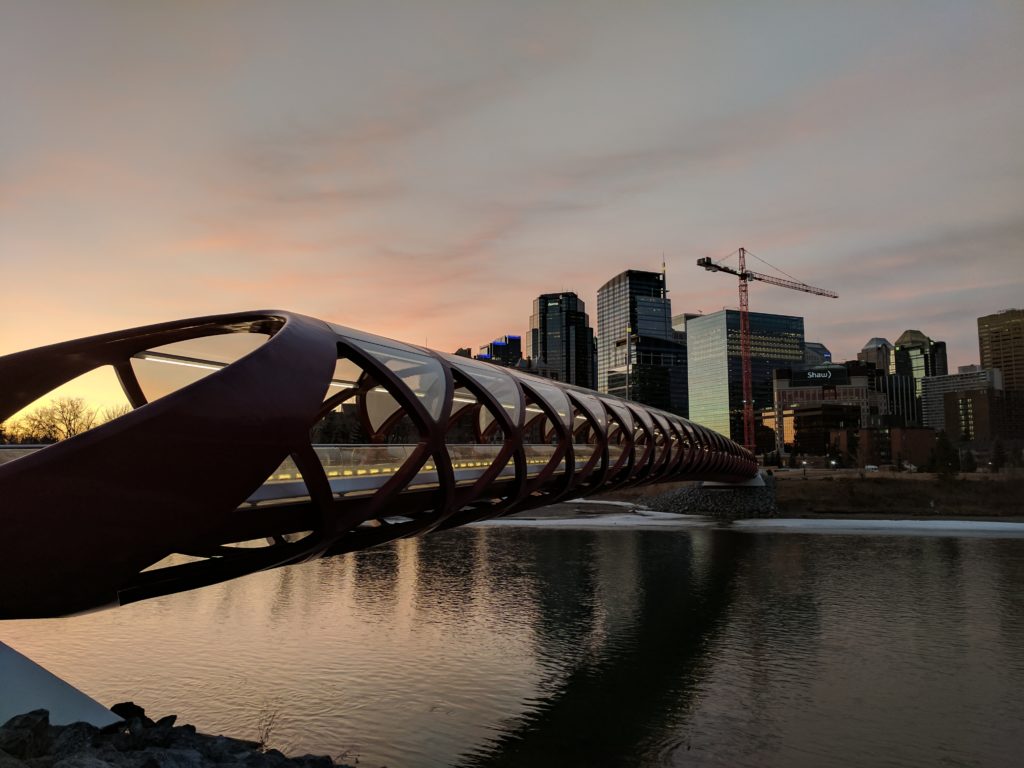 Sure it was controversial, which for a city that some times has trouble spending money on things that aren’t roads isn’t surprising, but damn is it ever pretty. Â I often give guides to travel writers and it’s the one thing they always want to see. Â No matter the day, it always looks amazing and in a way it’s become a lighthouse for Calgary. 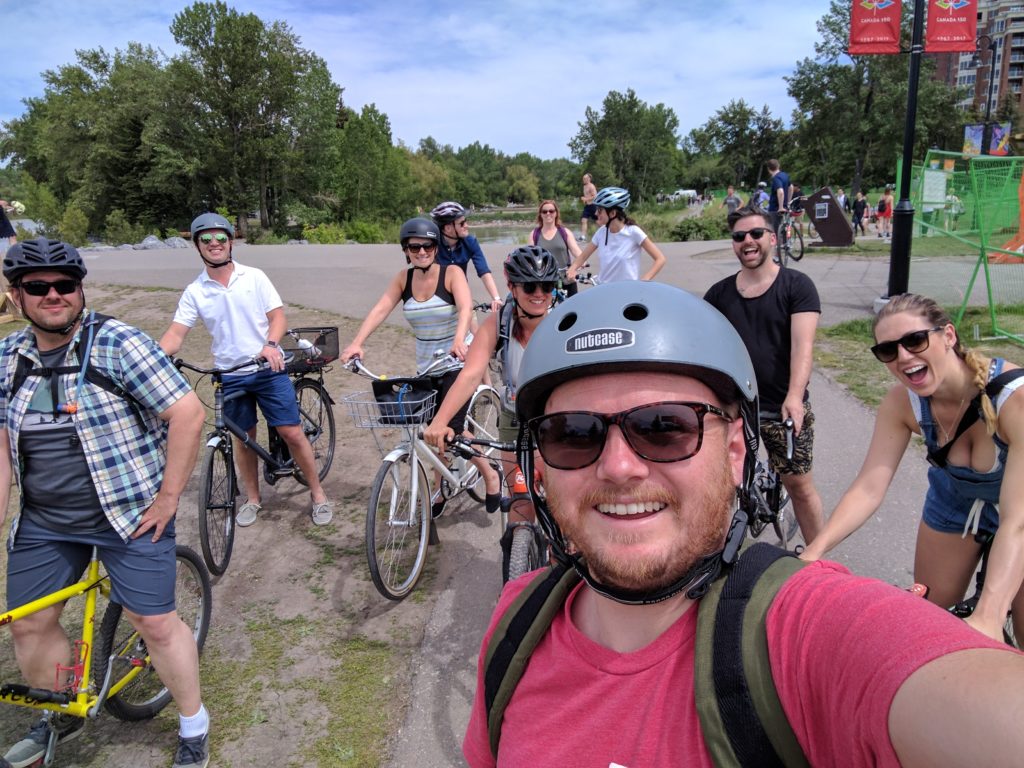 As the author of Calgary By Bike (available wherever fine books are sold), it should be no surprise that I love biking in Calgary, and I’m not the only one. Â Ever since the separated bike lanes were installed a few years ago, their usage has astounded even the most cynical of Calgarians, that’s because Calgary is actually an amazing place to bike. Sure there’s those big hills that bring you down into the river valley, but if you want to enjoy downtown Calgary and the river pathways, it’s all flat and easy to coast across the city without even coming close to sweating. Now that’s what I call biking. 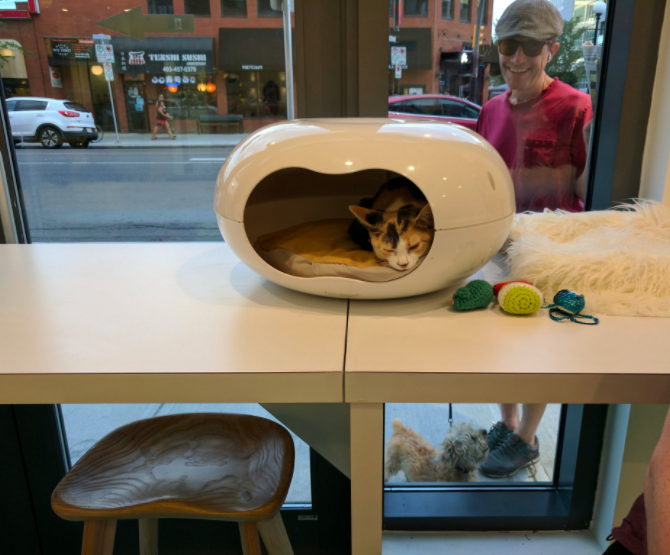 Again, no surprise I love the Regal Cat Cafe. It’s a cafe near my house with cats and coffee. No other explanation needed. Plus, they’ve already adopted out more than 30 cats to forever homes since they opened at the end of June.

Giant robot DJs spraying the audience with steam with giant fireballs in the background?Yeah, #Beakernight has that. pic.twitter.com/ulFG2Ik64E

The Calgary Stampede is known around the world, but Beakerhead, which is unofficially billed as Stampede for Geeks, is what I really love about Calgary. Every September, giant robots, monsters and scientists descend upon Calgary and wow us with feats of engineering, science and did I mention giant robots? Â If you’ve never been, put Beakerhead in your calendar (September 13th to 17th), because it is something that is truly unique to Calgary and doesn’t feature a single cowboy hat. 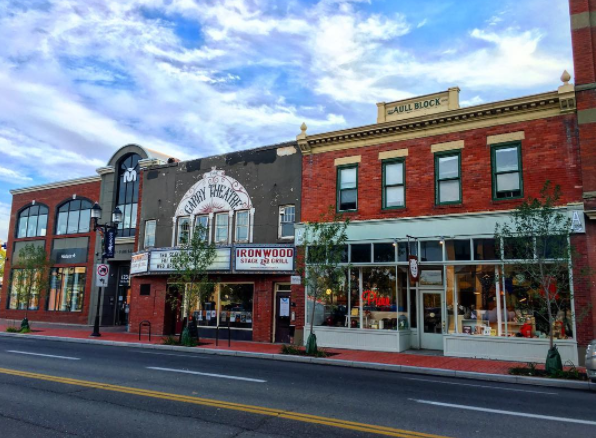 If I ever find myself talking to someone who wants to do a quick tour of Calgary, I always send them to Inglewood, and if you haven’t been lately, the neighbourhood has almost completely re-invented itself and is now packed with unique independent shops, breweries and some really great food. Plus, if you’re a fan of the TV shows Fargo and Wynona Earp, every day is like getting a free set tour. Â While I wish the stores stayed open later and measures were put in place to calm 9th Avenue traffic, it’s still my favourite neighbourhood in Calgary.

Those are some of my favourite reasons, I’d love to hear yours!