Calgary doesn’t have a Santa Claus parade, so here’s the...

It’s been ten years since Calgary hasn’t had a Santa Claus parade. You’ll remember that it closed so the city could build the Bow Tower, which has now been open for five years.

But even though Calgary doesn’t have a Santa Claus parade, that doesn’t mean you can’t take part in one of the most festive of moments. There’s lots of nearby towns and cities that do celebrate! Here’s my up-to-date list. As always, confirm with each of the locations before you make the drive.

Santa Claus Parade of Lights
November 18th
6:00pm, Banff Ave.
“As fall retreats and winter emerges, so does the wonder and joy of Christmas in the Canadian Rockies. The anticipation and excitement during the countdown to Christmas becomes oh so real. This year, ignite your spirit early by welcoming Santa under the twinkling lights of Banff Avenue for a festive gathering like no other.” 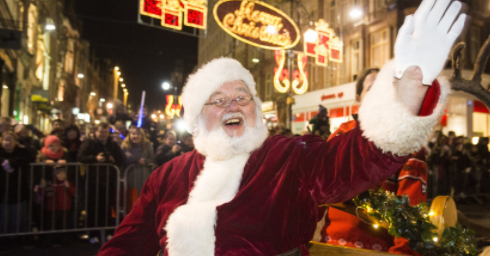 “Celebrate the glow of lights, the wonder of winter and the arrival of Santa Claus, outdoors at twilight!

Bundle up, sip on hot chocolate and gather with friends, family and community members on November 19 at Jasper and 99th street to kickoff the holiday season. Stop in Churchill Square to grab a bite at one of the food trucks or visit Santa’s Letter Writing Table before you head to the parade route. Afterwards, warm up at a bonfire in the square.”